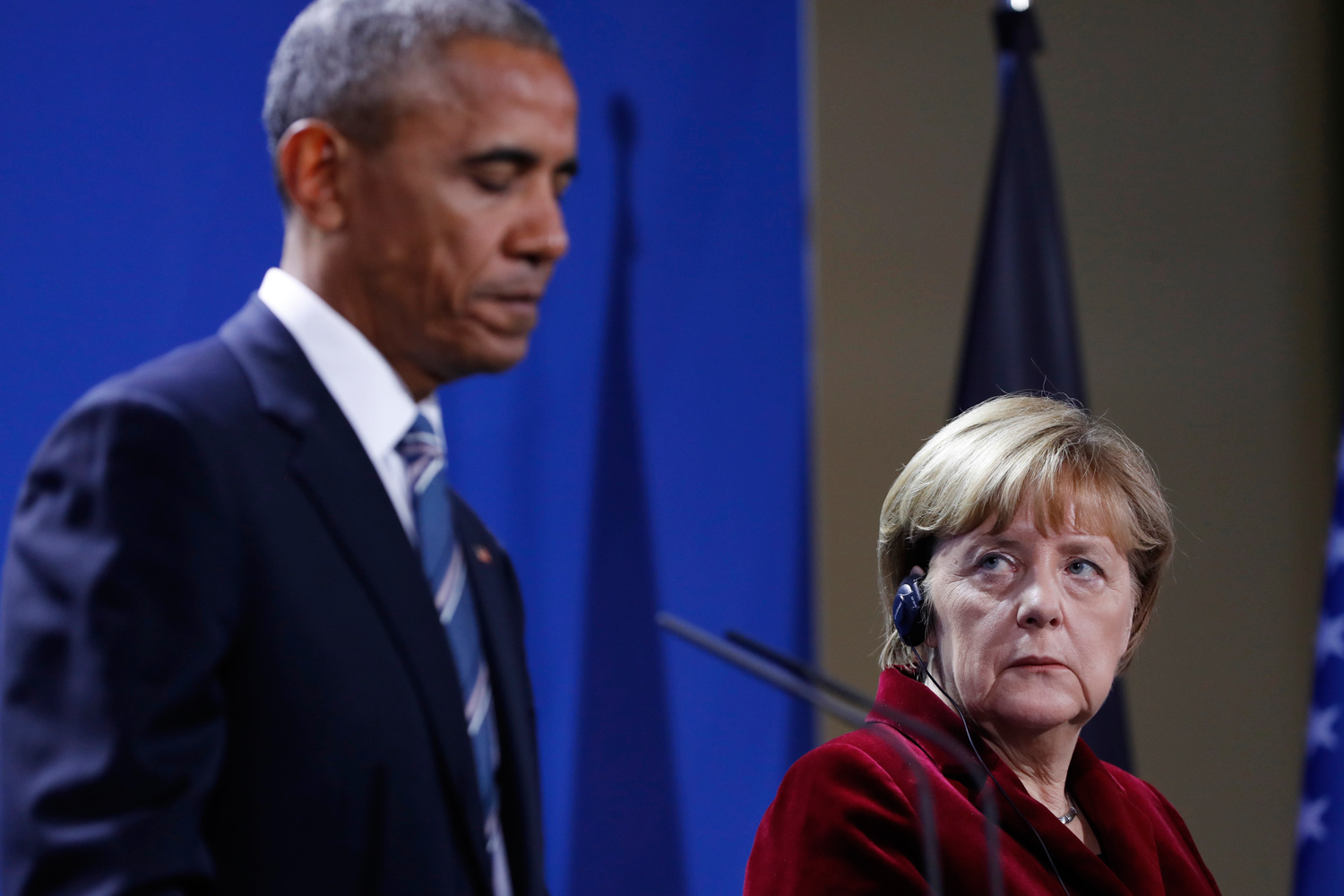 The Germans have grown disillusioned with the American president.

When Barack Obama visited Germany as a senator in 2008, he was greeted by a crowd of 200,000 as a man in the image of John F. Kennedy, who in 1963 assured Berliners that he was one of them. After eight years of George W. Bush, Obama seemed to promise not just a course correction, but a new enlightened era in American global leadership. The decision to award him the Nobel Peace Prize at the start of his presidency reflects the Continent’s initial high hopes that he would prove a more “European” president.

His farewell visit to the city on Wednesday, however, will be a more somber event, and not only because of what will follow his two terms. Over the past eight years, the Germans have grown increasingly disillusioned with the American president, and the euphoria of his first visit, at the height of summer, has given way to the melancholy of fall.

Germans were disappointed by his failure to close the detention camp at Guantánamo Bay, and they grew dismayed as he increased the use of drones to eliminate enemies, with sometimes significant collateral damage.

But for many Germans, the biggest betrayal came with the 2013 revelation that the National Security Agency had been systematically spying on their country, and had even wiretapped Chancellor Angela Merkel’s phone. For a country still haunted by memories of the Cold War, this recalled the mistrust and invasions of privacy of the Communist era. Worse still for Germans, this betrayal was perpetuated by a close ally, led by a president who was supposed to be one of them.

And it’s gotten worse. Obama has been a leading voice on the Trans-Atlantic Trade and Investment Partnership, which many Germans strongly oppose – so much so that he was met with protests during a visit to a trade fair in Hanover this year.

The man once seen to share European interests is now seen as pursuing purely American interests and values, favouring profit and big corporations over the environment, consumers and workers. And the Obama presidency has been marked by a strategic turn away from Europe and toward Asia, indicating that the Continent was no longer his major concern. American withdrawal under Obama from certain regions, especially the Middle East, left them in turmoil and created negative consequences for Europe in the form of an increased terrorism threat and the refugee crisis.

In this sense, Obama was no different from Kennedy, who used soaring rhetoric to sell an American-centered agenda. The key difference is that during the Kennedy era, American interests were aligned with German ones. As the front line of the Cold War in Europe, Germany was an important strategic country for America. This became obvious during the Berlin Crisis, when Nikita Khrushchev tried to absorb West Berlin into the Soviet sphere. Kennedy, who was able to secure the freedom of the West Berliners, became regarded as a savior by many Germans – even if, in many other areas, he did things that should have turned them off.

Interestingly, Obama’s relationship with at least one German – Chancellor Merkel – has gone in the opposite direction. Ms. Merkel, who is famously pragmatic, did not start off with an idealized view of Obama. Her relationship with him was initially strained when she refused him permission in 2008 to speak at the Brandenburg Gate, where Ronald Reagan had given his famous “tear down this wall” speech. Instead, Obama had to appear in front of the less iconic Victory Column, a few hundred yards to the west.

But as her compatriots’ enthusiasm for Obama cooled, Merkel warmed to him. The two were able to work well together because they shared certain personality traits: calmness, pragmatism and the courage to make unpopular decisions.

Ms. Merkel, realistic and analytical, was able to understand the political framework within which Obama acted and remained unsurprised that he was, after all, an American president, pursuing American interests. Although Obama was able to use the Kennedy myth to endear himself to the Germans, it was never his intention to play a similar role in the country. For him, Germany was of little geostrategic importance. But because of their romanticism and desire for another savior from across the Atlantic, the Germans allowed themselves to be taken in.

Of course, a good part of the Kennedy myth arose because of the unpopular presidents who succeeded him. It remains to be seen whether Donald J. Trump, and all that he brings with him to the world stage, will similarly lead Germans to one day view Obama in a more positive light.

Madhvi Ramani is a writer and editor, The New York Times