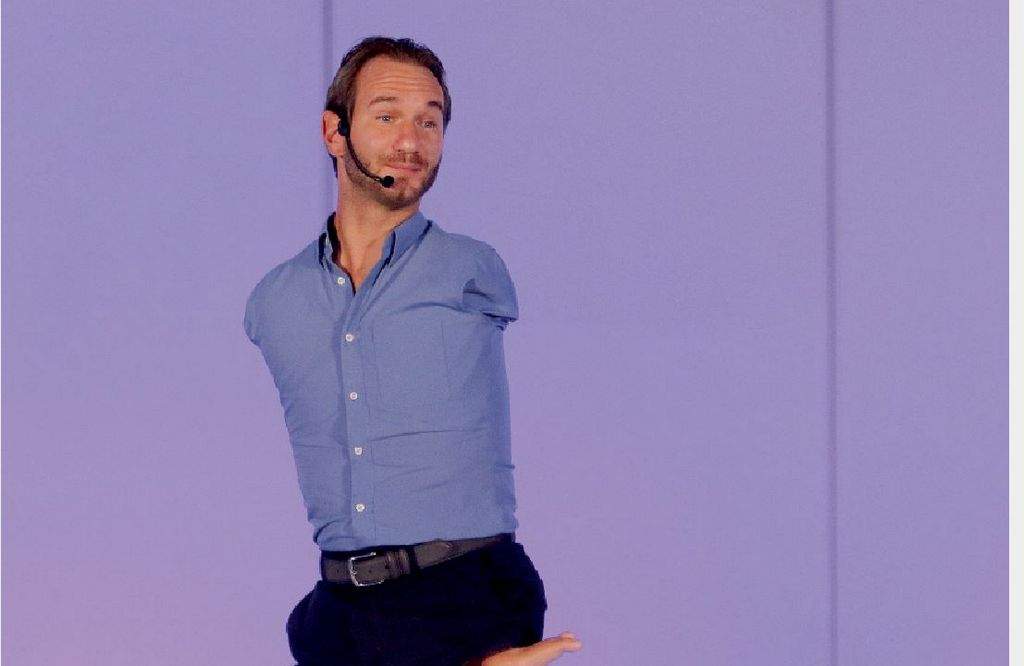 Friday night turned out quite a ‘Night of Hope’ for thousands of people who came to the The Dome arena in Sports City to attend a talk by motivational speaker Nick Vujicic. Dubai audience was moved, touched and inspired as this ‘unstoppable’ Aussie showed the city that he did not need limbs to own the world! Nick weaved magic with his candid yet animated talk on how he transformed his ‘life without limbs’ to a ‘life without limits’.

With almost a totally sold-out show on Thursday in Sharjah and on Friday in Dubai, Nick engaged, entertained and inspired over 3,000 people of the UAE who listened to his stories in rapt attention. Nick shared some invaluable lessons that life taught him through his struggles, being different from his friends and having the will to carry on in life despite his disabilities.

As the event proceeded, Nick not only planted the seeds of hope, love, never-give-up attitude and having a purpose in one’s life in the audience but also made them laugh by enacting some funny scenes from his life (not to forget sound effects given by him such as announcement bell, phone bell) such as when he posed as the captain of a flight and shocked the passengers.

Nick spoke about how he embarked upon this career of being a speaker at the age of 17 when his school janitor told him he would become a speaker in the future. “I thought he was crazy! He invited me to speak in front of a small group of students, and they were touched. Then I found myself in front of 300 students sharing my story, and one girl came up and thanked me crying saying that no one had ever told her she was loved or beautiful. That’s when I knew I wanted to share the message of hope, love and I knew this is what I wanted to be, a speaker.

Now 34, Nick has received 35,000 invitations to speak without any marketing, has given over 3,000 speeches in 63 countries and has met 16 presidents and spoken to nine governments on creating awareness about bullying. “We hope to include this topic in some curriculums in schools worldwide.”

Nick concluded his speech on a strong note, urging the audience to find purpose in their lives and live a life of integrity that people would remember you for your positivity after you die. “People will remember you for how quickly you forgave, they will talk about of how you were a man or woman of integrity, your generosity. They will talk about ‘Who you were and not what you achieved!’

Nick spoke for over an hour and took about eight questions from the floor. This is his fourth speaking tour in Dubai. He has never had the chance to tour the country as a tourist, but hopes to do so soon with his family. “I’d like to come here on a vacation and really enjoy it,” he said.

Responding to a little girl’s question from the audience about how to deal with bullying at school, a cause close to Nick’s heart, he said: ” Do you know about a 1,000 teenagers commit suicide in the US due to bullying? We all can play a part in stopping this by not being part of gossip just because everyone does it. Firstly, stop anyone from talking ill about any other person, secondly don’t spread gossip as it is worse than starting it.”

In order to deal with bullies, he said: “The first thing you can do is to ignore them, tell a teacher or a friend but that doesn’t always help. So, the best thing to do is to love yourself. Remember, those who bully you won’t be with you for the rest of your life. Surround yourself with like-minded people who agree that bullying needs to be stopped.”

Faith in God and the self

“You were made for greatness and there is hope for you, so keep the faith, keep loving, never give up on you because you don’t know how beautiful you are until you believe in yourself and give yourself a chance,” said Nick Vujicic during his speech in Dubai.

“I don’t think I could have the hope that I have found without my faith in God. With prayer and scripture and meditation, that’s how I get through my daily life, through the ups and downs.”

Advising the audience, Nick said: “Whether you achieve your dream or not, you are still you and you need to believe in yourself, because falling does not equal failure. Falling is actually moving a step closer to realising your dream. I called 52 schools to get a chance to speak as a motivational speaker but all refused, but that was not failure because I kept trying and the 53rd school invited me to give a five-minute speech and from there my career took off.”

“My parents always taught me that even though we don’t know why I was born this way, we have a choice. Either to be angry for what we don’t have or be thankful for what we do have. The power of that choice was the first thing that I had to overcome and decide for myself, especially in the early years of school.”