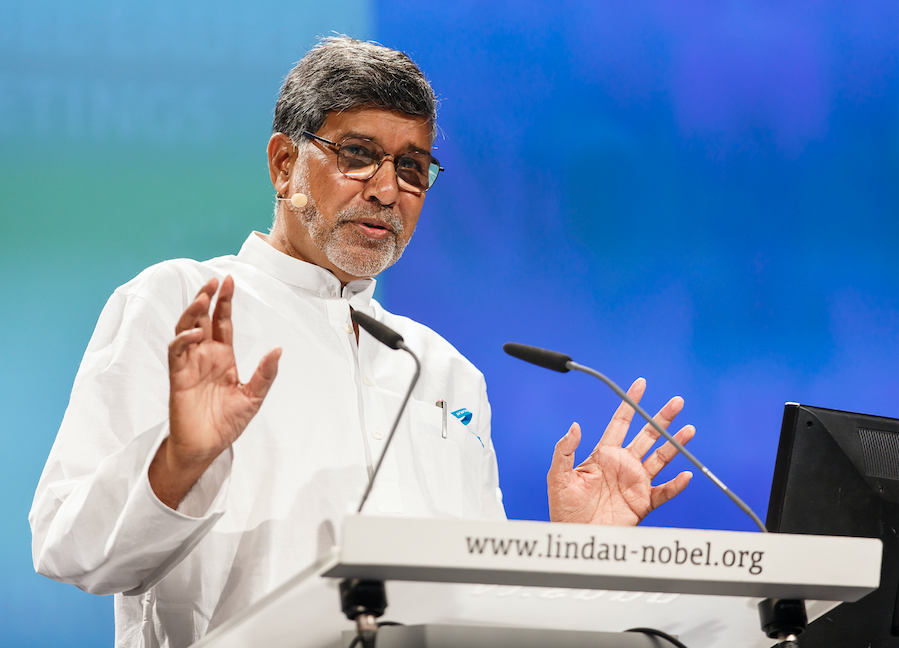 Notwithstanding the suffering of the common people, Kailash Satyarthi supports the governments demonetisation move as it will help curb trafficking, but the Nobel laureate and child-rights crusader asserts that unless and until children become a political priority, India will continue to be dogged by the evils of child labour and child trafficking.

And endeavouring to ignite a social movement are his two initiatives: “Laureates & Leaders for Children” and “100 Million for 100 Million”.

The Laureates & Leaders for Children summit, to be held in December at Rashtrapati Bhavan here, has attracted over a dozen Nobel laureates and global leaders, including the Dalai Lama, Liberian peace activist Leymah Gbowee, Australia’s first woman Prime Minister Julia Gillard and Princess Charlene of Monaco, who will raise their collective voices against violence and discrimination against children.

They will brainstorm and commit to action in their respective fields to accelerate progress and achieve breakthroughs to benefit children, by signing a declaration.

The summit will also witness the launching of the “100 million for 100 million” campaign, which aims to mobilize, over the next five years, 100 million youth and children for 100 million underprivileged children across the world to end child labour, child slavery and violence against children and promote the right of every child to be safe, free and educated.

Having been at the forefront of the global movement to end child slavery for four decades now, Satyarthi is also aghast at the “paltry” government spending on children, who make up more than 40 per cent of India’s population.

“We don’t have progressive laws on child labour; our government spends a paltry four percent of its budget on children and we have a massive prevalence of child trafficking. All this will not change unless and until children become our political priority.”

“Trafficking is a thriving trade running into several lakh crores of rupees, a majority of which is black money. Yes, the demonetisation drive is causing sufferings to the people, but at the same time it has hurt the traffickers badly,” Satyarthi told IANS in an interview.

“But the fact remains that children are not our political or even social priority. So it is not surprising that we have one of the highest numbers of malnourished children, child labour and trafficking,” he says.

Pointing to the fact that child labour immensely contributes towards black money, Satyarthi blamed the latest law dealing with child labour for actually promoting the evil.

“A child labourer is paid nearly one-fifth of what an adult gets and this allows an employer to save around Rs 200 on every child that he employs. While in their books they show they have hired adults, but in reality they employ children and in this way a lot of black money is generated.”

“You cannot have a law that permits child labour,” he said, referring to the Child Labour (Prohibition and Regulation) Amendment Act, 2016, which has cut down the list of hazardous occupations for children from 83 to include just mining, explosives and what is mentioned in the Factories Act.”

“We are fighting against this new law. It is imperative that the list of hazardous occupations is increased from the current three that it has now proscribed,” said Satyrathi, asserting the several rounds of talks with the government have been fruitful and he was confident of the list being amended.

He also lamented the lack of coordination and cooperation between various government departments.

“There are a host of ministries involved but they hardly sit together and coordinate which eventually trickles down to the local level. The different departments are so fragmented that often the cause that they are fighting for gets lost.”

“In case of a rescue of a girl, say from trafficking, we have to deal with as many as nine different departments, including the Home Ministry, the Child Welfare Department, the Labour Ministry and the like. The lack of coordination between them often makes our job difficult,” he said.

The way forward, he says, depends only on a massive social movement.

“We need to have a massive social movement, only then you can generate the political will necessary to improve the life of our children,” Satyarthi concluded.