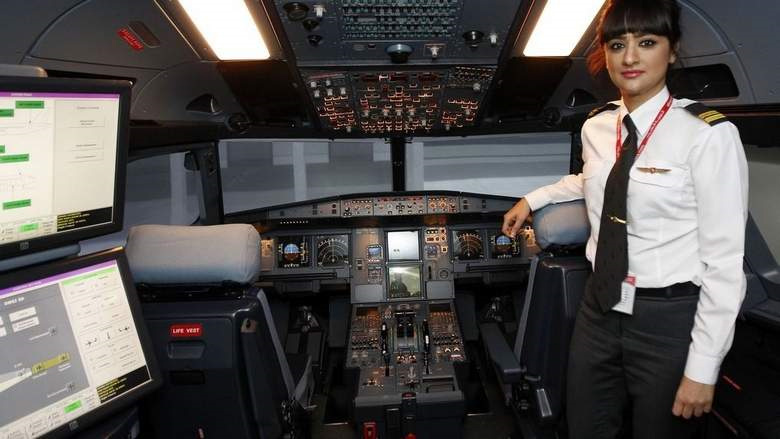 The sky is no longer the limit for success in the aviation sector, said Ghada Mohamed Al Rousi, a first officer with Air Arabia. The sector is open to any woman who can perform her role well, she added.

The first Emirati to get a multi-crew pilots licence (MPL) said piloting an aircraft should not be about gender, but instead involves hard work and the ability and desire to achieve dreams. She said more Emirati women would join the aviation industry as the UAE supports them in every walk of life.

“Mindsets are starting to shift and today, women are playing very important roles in many professions. I graduated as the first Emirati holder of the MPL and I would like to inspire other Emirati women to accept the challenge,” Al Rousi told Khaleej Times.

The Air Arabia pilot has so far completed around 1,000 flying hours, including 900 hours on A320s and the rest in small aircraft. She is happy to be part of the Air Arabia flying family and currently has no desire to operate larger aircraft – Airbus A380 and Boeing 777 – but didn’t rule it out in the future.

“It is an appropriate time to build a career in the aviation industry as airlines across the globe are growing, but also facing a shortage of pilots. The industry is flourishing as more planes are on order, more flights are being launched and more passengers are ready to take off,” Al Rousi said.

“The trend will change as awareness is growing and opportunities are rising,” she said.

Inspiration
“I inspired myself. When I first entered the cockpit, I felt I could do it. I didn’t feel so when I was a child; it struck me a few years ago. But as soon as I felt that way, I wanted to do a pilot training course.

“I checked the different options available to become an airline pilot and decided to apply at the Alpha Aviation Academy in Sharjah for the Air Arabia MPL programme. I cleared all the exams and interviews. Then, I started training,” she added.

Sharing her memories while training at the academy and later in Greece, Al Rousi said it was not easy but she was able to do it owing to her hard work and support from family.

The course at Alpha Aviation lasted for 20 months. “After a few weeks of receiving my licence, I started flying,” she said.

Message for female pilots
Al Rousi said being a good pilot doesn’t depend on gender. It depends on how professional you are and how much you love your job.

“I fly with both male and female pilots and I care about their professionalism, not their gender. You are not better because you are a woman or a man,” she said.

Al Rousi urged Arab women to come forward and join the aviation industry. “We definitely need more women pilots because currently only three per cent of commercial pilots worldwide are women. Especially for Arab women, I would say ‘Don’t listen to others, listen to yourself’. If you have a passion for it, go for it!

“If you dream for something, you have to do it or at least attempt to do it. The government supports women a lot, so if my country gives me so much support, then why would I not do something to make my country proud?”

She enjoys flying to different countries and the varied experiences. Apart from flying, Al Rousi also loves to travel. One of her favorite destinations is London.