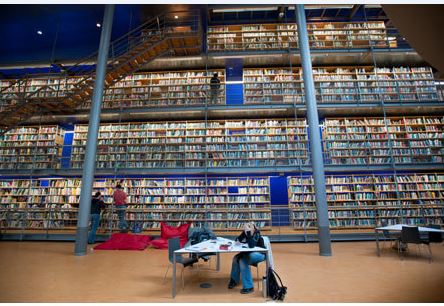 The library of Babel is a short story by Argentine author Jorge Luis Borges (1899–1986), that describes a near-infinite library containing all possible 410-page books whose sentences were created from 25 basic characters (22 letters, the period, the comma, and the space).

Every possible combination of each of these characters is represented in the Library. Thus, the library represents what scientists have been thinking about with respect to the multi-verse; the infinite number of universes that contain everything that is possible given the known physical laws of the universe. In Borges’ story the Library contains almost everything useful there is to know about the universe. Because the library contains every possible combination of the basic character set, everything that could be written is written in one of the books of the library.

But the vast majority of the books in the library are pure gibberish. Clearly combining randomly each character with every other character in the primitive 25 character base-set will produce a near infinity of books that contain utter garbage. Nevertheless, somewhere in the library there must exist books that contain all of the information that you would need for any possible outcome. All that is useful to know about your future, your death and your children’s futures and death and their children’s futures and deaths etc is in the library. All the cures for any disease, the methods to defeat death, the path to riches, the best possible social arrangements, the elimination of poverty and on and on—all this priceless information would be contained in the library simply by randomly combining all the characters in the basic character set.

The problem, of course, is how to find and retrieve the books that are useful. How do you screen out and ignore the near infinity of books that contain garbage or horrors? In the story Borges’ has the narrator describe all of the futile attempts the residents of the library have made in their efforts to find the useful books while ignoring all the garbage. Many residents of the Library of Babel become superstitious. They begin to imagine that there must be a book in the library that contains the key to all the other books in the library. That magical book, must exist since all possible books are in the library and if it exists there must be librarians who, just by chance, live near it and at least one such librarian must have read it. This librarian is called “man of the book” and he will come and teach all inhabitants of the library the secret code to unlock its riches.

What does all this have to do with sleep and dreams? One theme that I keep returning to in this blog is how dreams relate to randomness and to concepts of infinity. While waiting for the messiah to arrive, the librarians begin to realize that every thought that they have corresponds to some phrase in some book in some region of the library. All thinkable thoughts have already been written down and published in book form in the library. Therefore one can actually ignore the books containing gibberish and retrieve a book that contains some coherent thought simply by thinking coherent thoughts. Thinking, from the point of view of the Library just IS retrieval of at least one book that contains at least one coherent thought in it.

Now if a librarian wanted to retrieve NOT JUST the books that have coherent thoughts (ignoring the near infinity of books without coherent thoughts) but also the books that contain riches or useful information, then what retrieval strategies should be employed? Clearly the best way to get to the riches of the library would be to adopt an unbiased, randomized search strategy with the single constraint that the retrieved books must contain some coherent thought; i.e. that the search strategy be conducted via thought/mental activity.

Dreaming satisfies those search constraints. The images that turn up in dreams are not mere recombinations of memories. There are an abundance of novel images/thoughts in dreams. Some of the images that do show up in dreams are random –they have no rhyme or reason for appearing-they are just there. In short, dreaming may be the closest thing we have to an unbiased, randomized search engine that each night searches through the near infinite library of information that is the universe. If the Library of Babel that is the multiverse contains priceless information that can be used by you if you can access it; AND if dreams randomly search that universe of information each night for that priceless information, then dreams, may after all, surprise you with extraordinary revelations at least once in your life.–Psychology Today