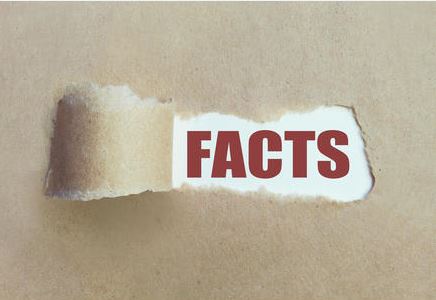 Recent qualms about the fact-free drift of the political conversation often miss complexities about what exactly are facts. Nobody that we all trust (as we might perhaps trust a recently published atlas to tell us the capital of a country) can tell us whether millions of people in California illegally voted for Clinton.

The issue is not an indifference to evidence; instead, the issue involves competing systems for determining what constitutes evidence. We all rely on proclamations (as I blogged here), but people differ on the question of whose proclamations they believe. We differ on why we rely on one news source over another. These questions are even stickier given postmodern ideas about the difficulties of representing reality without a slant. The culture of science and the culture of journalism are supposed to foster truthful statements, but many reputable journals and newspapers have published false information. I am drawn to sources that print corrections because I think an air of fallibility is a hallmark of trustworthiness. Other people are drawn to sources that are never wrong, or never admit it in so many words. I thought this selection from my book, Deadly Therapy, might tease apart some of these complexities.

Facts are opinions held by the right people. There’s a difference between a word and what it refers to, between a statement—a fact or an opinion—and the underlying state of affairs. I realize that certain states of affairs exist in reality and others are merely thought to exist. I also realize that it would be nice to call the states of affairs that really exist facts and to call ideas or statements about them opinions, but it’s not that easy. For example, my computer is on at this moment, and it would be nice to say that this is a fact and anyone who thinks otherwise is simply wrong. I don’t doubt that my computer is on, and I don’t doubt that anyone who thinks otherwise is wrong. But when I say “my computer is on,” I’m making a statement—I’m not actually turning my computer on. Everything we refer to as a fact is only a statement about reality. It’s a fact that Columbus is the capital of Ohio, but “Columbus is the capital of Ohio” is a statement. If Columbus is the capital of Ohio, then it’s a true statement, otherwise it’s a false statement. List facts you know and you will find yourself listing words, phrases, and sentences about reality. Since these are statements, they describe reality or they guide others around the environment, but they are not reality (well, they are a subset of reality, but these statements do not constitute the geographical reality that concerns us for the moment). What these statements are, then, are opinions, but they are opinions of which you can be certain.

How do we distinguish statements that are considered to be facts from statements that are considered to be opinions? I think the answer is in the degree of certainty you have in their being true (that is, in your being well-advised to let such statements direct and guide your behavior in the situations for which the statements are relevant). However, no amount of certainty can be a guarantee of truth. Indeed, if a truism is perfectly certain, then it is a tautology, true by its own terms, and its value is trivial. The capital of Ohio is the capital of Ohio. For another example, if we accept that Socrates is a rat, and if we accept that all rats are rodents, then it must be perfectly true that Socrates is a rodent. But to say that Socrates is a rodent is merely to restate what was said before in different language; the new statement does not include any new information beyond the statements that Socrates is a rat and all rats are rodents. Truisms can also be perfectly certain as an article of faith—indeed, faith’s hallmark is that it does not yield to evidence. There’s nothing wrong with that, of course, until you start basing geographical behavior on it. I mean, I admire people with faith that Jesus loves and protects them, but I don’t admire them if they jump off buildings and expect to be saved. Even Jesus did not go that far (Matthew 4:5-7).

For thousands of years, people thought the sun arose from the horizon in the morning and sunk beyond the horizon in the evening. Then, for several hundred years, people thought the sun went around the earth. They were wrong, as it turns out, but in those days, everyone thought it did, and nobody engaged in any behavior anywhere on earth that was made more difficult or less useful as a result of that belief. (It was only when some people started keeping careful track of stars’ and planets’ locations that the belief in the stationary earth made anyone’s life more difficult.) It’s fine to stand here in the 21st Century and say that for thousands of years what everyone thought was a fact was actually an opinion. But what if you’re not standing in our shoes? What if you’re standing in the shoes of the Ancients? From that point of view, the stationary earth is a fact. More importantly, we are the Ancients with respect to all current facts, and we can’t stand in the eventual shoes of our intellectual heirs. The only way to know which of the things we currently believe to be facts will eventually be described as wrong (as mere opinions) is to wait and see. All current factual statements are only potentially true, their potential depending on what happens in the future. In the present day, the only distinction between facts and opinions is that enough of the right people believe the facts are true, and not enough of the right people believe that the opinions are true. If everyone agreed that an opinion were true, it would be a fact. Not everyone has to agree, of course; if enough of the right people agree, you have a fact. Even the number of planets revolving around the sun comes down to a vote on what a planet is (Erickson, 2006).

Who the right people are varies with the subject and circumstances. The right people may be scientists, religious leaders, experts denoted by their credentials or experience, eyewitnesses, the general population, or the judge at a bench trial (whose written decision is preceded by a list of facts she found to be true). Unless you are a physicist, you are probably willing to accept the consensus of physicists as to whether there is such a thing as a neutrino. Regardless of how smart you are or how good you are with words, you are probably willing to accept a consensus of dictionary writers and publishers as to how to spell a word. Religious leaders used to be given a lot more deference in Western European societies than they are now, but in some parts of the world, religious leaders still get to decide what’s a fact and what’s not.

A system of facts is useful to the extent that, like a map and its features, it helps us get around reality without too many bumps and bruises. It used to be a fact that the earth stood still. This fact was central to a system that helped astronomers locate the current, past, and future positions of planets. Now it is a fact that the earth moves. Facts exist in the social, political sphere, even though they are about things in the geographical sphere. I hear you saying that it was never a fact that the earth stood still, that this was a mistake. But if we insist on calling fact only those things that eventually turn out to be true, rather than those things currently believed to be true, then we have no way of knowing which of the many things we currently believe are facts. Thus, either facts are those things that turn out to be true and there are no facts until Judgment Day when God tells us what was what, or facts are those things currently believed to be true by the right people.—Psychology Today