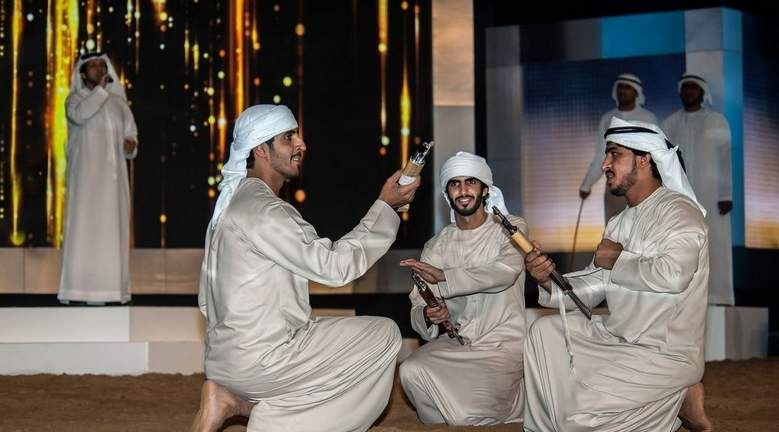 The first episode of the 17th edition of the Fazza Championship for Youllah kicked off to a brilliant start as 18 contenders gave a glimpse of their skills and talents exhibiting an ancient folk art in dazzling modern settings at Al Meydan quadrant at Global Village on Friday.

Organised and supervised by the Hamdan Bin Mohammed Heritage Centre (HHC) to revive heritage sports, the finalists are vying for the grand prize of Dh1 million and the Fazza Youllah Championship trophy over 13 rounds of the competition every Friday at 9pm.

A large crowd thronged the venue and enjoyed the patriotic songs of singer Hamad Al Ameri and verses from the poetry of the Nabati poet Mohammed bin Mushayt Marri.

The opening round started to the rendition of ‘God is in Dubai’, the new song for the Yuweel (Yuollah performers) finalists of the season 2016-2017, sung by artiste Mehad Hamad and composed by Fayez Al Saeed. The night’s programme began with a flashback from last season to recapture the most beautiful moments, the twists and turns of competition and the high levels of performance.

At the same time, it highlighted the contrasts of how an ancient art is captured in the new age in a theatre full of giant digital screens and colourful ambience adding a distinctive touch of modernity aided by the latest state-of-the-art visual technologies.