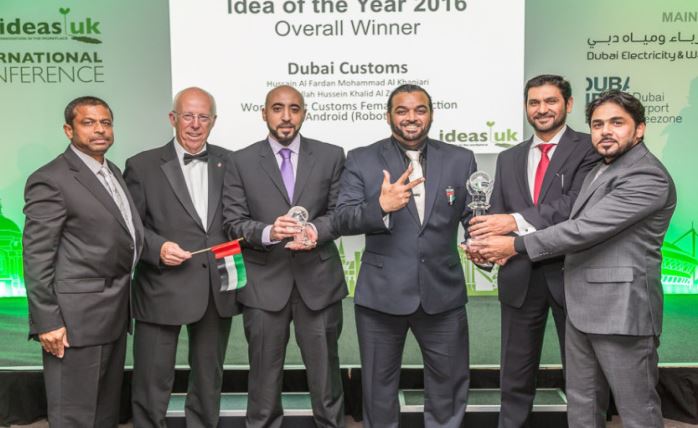 For the seventh time, Dubai Customs, DC, has received one of the most prestigious awards from Ideas UK Association, acquiring Platinum Accreditation by scoring 100 percent for the fourth year in a row. “The Android Inspector” idea, developed by Dubai Customs, won ‘Idea of the Year 2016’. Additionally, the Elderly and VIP Clearance Buggy won the 2016 customer service category award.

The innovations are aimed at reducing time and effort. Android Inspector, for example, is a smart robot that is capable of carrying out inspection tasks and can be equipped with inspection and tracking technologies to do additional tasks, such as face identification, body language reading, luggage tracking, and thermal scanning.

Sultan Ahmed bin Sulayem, Chairman of DP World and Chairman of Ports, Customs and Free Zone Corporation, PCFC, said, “At the PCFC, we pay utmost attention to keeping pace with the efforts exerted by Vice President, Prime Minister and Ruler of Dubai, His Highness Sheikh Mohammed bin Rashid Al Maktoum, so as to encourage everyone to innovate. We are relentless in our endeavours to upgrade our systems, aiming for the best all the time. These innovative ideas show our prudent leaders’ interest in driving everyone towards innovation and turning Dubai into the smartest city in the world.”

Ahmed Mahboob Musabih, Director of Dubai Customs, said, “These prestigious awards received by Dubai Customs from Ideas UK is an expression of our commitment to nurturing a solid culture of innovation and creativity among our employees, so as to keep pace with the vision and aspirations of Sheikh Mohammed bin Rashid Al Maktoum, which drive us to ensure that ‘Innovation is a daily government practice and a firm corporate culture’ by meeting the goal set by His Highness in turning generations of ideas into an organisational process within all governmental departments. We aim to achieve our vision of becoming the leading customs administration in the world supporting legitimate trade.”

“These innovations are the culmination of hard work and dedication shown by different teams at Dubai Customs. The Android Inspector and the Elderly and VIP Clearance Buggy are examples of many distinctive ideas that gain world attention in our journey to develop customs work worldwide,” Musabih added.