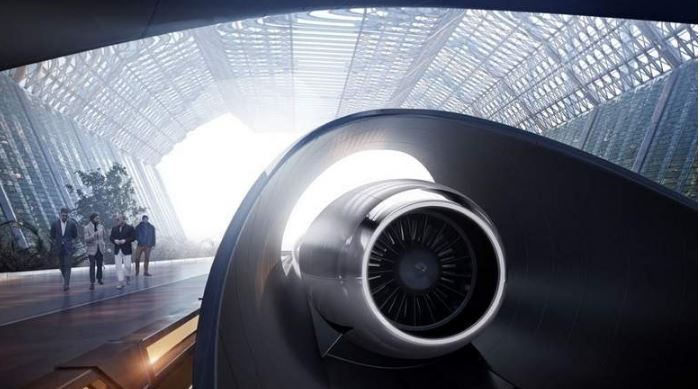 Travel from Abu Dhabi to Al Ain could be just eight to twelve minutes in future.

The Department of Municipal Affairs and Transport (DMAT) has signed an agreement with Hyperloop Transportation Technologies (HyperloopTT) for a feasibility study to connect Abu Dhabi and Al Ain using the Hyperloop system.

This combined with the first fully-operational Hyperloop system between Dubai and Abu Dhabi will change the way the capital travels in future.

Eng. Khalid Mohamed Hashim, acting executive director of Land Transport Sector at DMAT in Abu Dhabi, said: “Through this agreement with HyperloopTT, we aim to study the feasibility of developing of the first Hyperloop system, which is one of the latest and most advanced transportation technologies that is expected to reach a top speed of 1,200 kilometers per hour. We hope to take advantage of this technology to connect the cities of Abu Dhabi and Al Ain, which will result in a travel time of about eight to twelve minutes.”

“The reinforcement of connectivity between Abu Dhabi and Al Ain is one of the strategic objectives Abu Dhabi, aiming to stimulate economic, social and touristic development between Al Ain and its suburbs and the capital city.”

HyperloopTT has an agreement with Lawrence Livermore National Laboratory, which grants the company an exclusive license to use the laboratory’s passive magnetic levitation technology in the Hyperloop.

As one of the first companies in the world to develop the Hyperloop technology, HyperloopTT has secured its technology innovations and intellectual property with numerous patents – including trademarks granted in more than 33 countries.

The study agreement details a multi-phase rollout that includes route analysis, feasibility studies, and a cost estimate and development schedule which will be determined over the next few months. Once these analyses are successfully completed, both DMAT and HyperloopTT will discuss further steps. This project is the only initiative of its kind that has the support of the government of Abu Dhabi.

Bibop G. Gresta chairman and co-founder of HyperloopTT said: “By leveraging a global team of experts and professionals, we are working to achieve a technical breakthrough in the field of transportation in Abu Dhabi. Our team’s collaborative efforts from our offices in the UAE and around the world are focused on delivering humanised mobility through the development of the world’s fastest, safest and most energy-efficient transportation solution.”

“We see in this agreement a significant opportunity that will allow us to bring to life our vision of providing valuable solutions with a positive impact on safe, rapid and effective transportation. It will result in providing a sustainable solution – reducing the carbon footprint while enriching the lives of people in various communities here in Abu Dhabi.”

He also added: “This technology is based on the Halbach Array – a pattern of magnets which produces its own electrical current and levitation for the Hyperloop capsules – the next generation of MagLev technology for safe and sustainable transport. HyperloopTT has the exclusive rights to develop this technology because of its international reputation and its extensive corporate and research/development partnerships.”

The study will be useful for identifying locations for stations and tracks. The full environmental, economic and social benefits of this project will be realised once implemented. The cost of this exciting next-generation transportation technology – that is characterised by a high degree of safety and comfort – is estimated to be significantly less than traditional high speed rail. The system will also be completed in half the time needed to achieve traditional high speed rail projects, and will consume only a fraction of the energy.