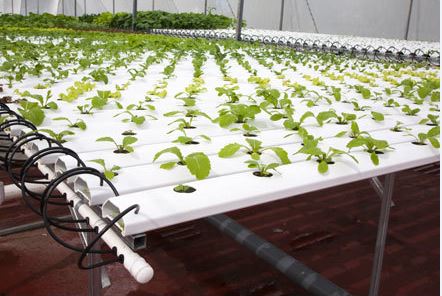 Growing lettuce in the desert is not most people’s idea of how to make a success of farming, but Amr Bassiouny believes he is on to something.

The 30-year-old chief executive of Egyptian Hydrofarms says he is growing salad greens at his farm on the outskirts of Cairo using 90 percent less water than traditional methods, and at the same time obtaining better yields.

“This is important in Egypt because we have scarce water resources, so you’re able to grow large quantities with much less use of resources,” he told Reuters Television.

Hydroponics is farming in water instead of soil. Bassiouny places his plants in pipes through which water and nutrients are pumped.

Egypt’s population of more than 90 million is growing, and agricultural land is shrinking due to illegal construction on the fertile banks of the Nile and its delta, the country’s breadbasket.

Unlicensed construction picked up pace after the 2011 uprising, with the government estimating that 90,000 acres (36,400 hectares) of farmland were lost in the first three years alone.

“We will be forced to move our farming to the desert, and when we move to the desert, we will either use up all the available water, so in 40 or 50 years we won’t have any more water and we will not be able to farm.

“Or, we can start looking for ways of growing larger quantities by using the least amount of our resources as possible,” Bassiouny said.

Some say hydroponics was used as far back as the Hanging Gardens of Babylon, one of the seven wonders of the ancient world. That theory is unproven, but hydroponics adherents believe the technology has stood the test of time.

Though costlier, hydroponics is attractive for present-day Egypt, much of which is arid and unsuitable for traditional farming.

Bassiouny hopes to start exporting to the Middle East as water shortages get worse and traditional farming becomes more difficult.

“Even today, the water in desert wells is becoming too salty and unsuitable for farming. So we need to find alternative methods of farming, especially since we won’t just be feeding ourselves, but we will also be exporting to other countries.”

Commercial manager Adel Shentenawy, 32, said he had launched a social media campaign to explain the benefits of hydroponics.

“Hydroponics isn’t a new idea, it’s been around since the time of the Pharaohs … All we did was take this idea and added technology, efficiency and productivity.”—AFP