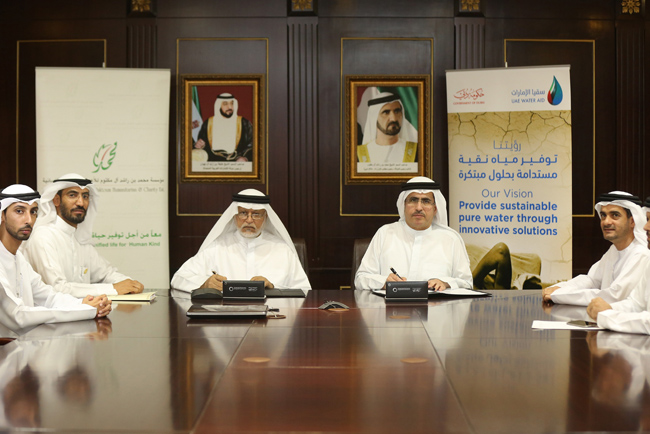 The UAE Water Aid Foundation, Suqia, operating under the umbrella of Mohammed bin Rashid Al Maktoum Global Initiatives or MBRGI, took part in a special session organised by the Arab Water Council under the theme “Water Technology and Sustainable Development in the Arab World.”

The session was part of the International Conference on Sustainable Water Resources Management, organised by the National Water Research Centre in Cairo, Egypt. It aimed to highlight the importance of modern water technology and its effect on enhancing sustainable development in the Arab region.

A group of experts and academic researchers with specialisation in water technology attended the session besides a number of representatives from several national, regional and international organisations and entities. Key spokespersons, who focussed on water-related changes and sustainable development in the Arab region, also took part in the event.

Several representatives from national, regional, and international organisations discussed their experiences and skills in their respective fields.

According to Saeed Mohammed Al Tayer, CEO and MD of DEWA and Chairman of the Board of Trustees of Suqia, Suqia strives to enhance the international role of the wise leadership and tackle the challenges facing humans while providing aid and support to people all over the world.

“The new foundation consolidates the work of 30 organisations focussing on fighting poverty and illness, spreading knowledge and culture, empowering the community and driving innovation. Suqia works to fight poverty and illness, with the focus on water research until 2025. This supports the long-term vision of His Highness Sheikh Mohammed bin Rashid, about water being one of the challenges that our region will face in the near future,” he added.