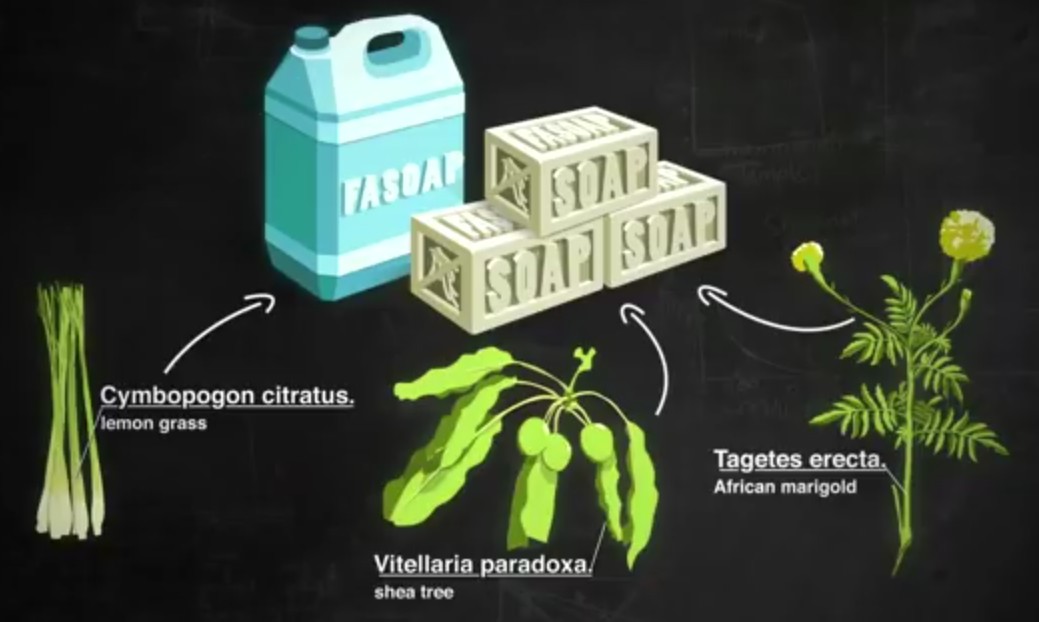 Thrusting their arm into a box full of hungry mosquitoes, a group of brave volunteers in a Burkina Faso laboratory test an innovative weapon in the fight against malaria — soap.

The team behind the “Faso Soap” project aims to create a cheap, accessible product to repel mosquitoes and protect people from a disease that claimed nearly 500,000 lives in 2015, most of them in Africa.

With one eye on a stopwatch, Gerard Niyondiko, the Burundian researcher behind the special soap, watches the behaviour of around a hundred hungry female mosquitoes.

The volunteers wait to be bitten, but the odorous liquid — a secret mix of local plant oils — applied to their skin beforehand protects them from the cloud of hungry insects.

In the small laboratory in Burkina Faso’s National Centre for Malaria Research and Training in Ouagadougou, Niyondiko has been working since June to test the effectiveness of the soap at repelling mosquitoes and refine the recipe using different oils.

In West Africa, “malaria kills a child every two minutes”, Niyondiko says. Of the 214 million people infected with malaria in 2015, 88 percent of cases were registered in Africa, according to the World Health Organization. Among them, 438,000 died and children are the most vulnerable.

The idea of using soap came from seeing that malaria continued to spread despite the distribution of mosquito nets.

“Mosquito nets offer protection during sleep but they keep the heat and the most vulnerable populations can’t afford to buy repellent for the whole family to protect them the rest of the time,” Niyondiko said.

“So we thought about a product used in the everyday life of these populations, which doesn’t require any change of habits.”

Soap was ideal, he said, because “it’s a product that even the poorest households buy and the whole family can share it”.

“If we manage to integrate (malaria) prevention into this product which is already available at an accessible price, it will mean we can save people who are unwilling or unable to spend more to protect themselves,” he said.

The project is targeting the six countries worst affected by malaria in sub-Saharan Africa, which includes Burkina Faso.

“We are working on prevention with a new tool: bringing together two things which don’t at first glance have anything in common: hygiene and malaria,” said Lisa Barutel, 28, one of Niyondiko’s two associates on the project.

By using local essential oils as repellent, Niyondiko and his team hopes to keep costs to a minimum.

After training first as a chemist, Niyondiko won a bursary to leave Burundi and study for a master’s degree at the International Institute for Water and Environmental Engineering in Ouagadougou.

There in 2013 he met Frenchwoman Barutel, who was in charge of helping students with their projects. She set up an incubator for projects with a social aspect in Ouagadougou and helped Niyondiko gather funding.

Faso Soap hit the headlines in 2013 when it won the $25,000 Global Social Venture Competition, an international award run by a network of business schools around the world.

But a lack of funding put the project into standby mode until 2015, when it relaunched with a more scientific approach and partnered with a French start-up specialising in micro-encapsulation, a technique to allow the soap’s active ingredients to work effectively for longer.

The laboratory tests now are being done in line with a scientific protocol so the soap can be approved by WHO and afterwards used in other countries.

There are two stages of development to go before the soap can be released to the public, and Barutel said she hopes to “help a whole country” with their “invention for everyone”.—AFP