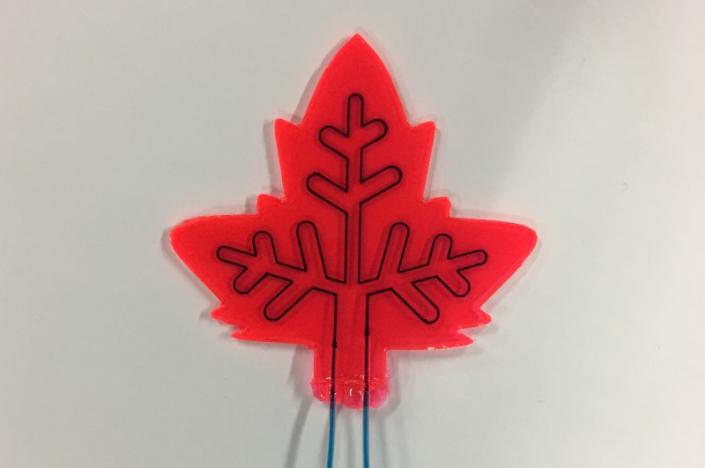 Dutch scientists have developed an artificial leaf that can act as a mini-factory for producing drugs, an advance that could allow medicines to be produced anywhere there is sunlight.

The work taps into the ability of plants to use sunlight to feed themselves through photosynthesis, something industrial chemists have struggled to replicate because sunshine usually generates too little energy to fuel chemical reactions.

“Theoretically, you could use this device to make drug compounds with solar energy anywhere you want,” said lead researcher Timothy Noel at Eindhoven University of Technology.

By doing away with the need for a power grid, it may be possible one day to make malaria drugs in the jungle or even medicines on Mars in some future space colony, he believes.

The device, made from silicone rubber, can operate even when there is diffuse light, which means it will work under cloudy skies. However, there is still a way to go to scale up the process to make it commercially viable.

Noel and his colleagues, who published their research in the science journal Angewandte Chemie on Wednesday, are now trying to improve energy efficiency further and increase output.

Because the artificial leaf relies on micro-channels to bring chemicals into direct contact with sunlight, each unit needs to be small – but they could be easily linked together to increase production.

“You can make a whole tree with many, many different leaves placed in parallel,” Noel told Reuters. “These are very cheap things to make, so there is a lot of potential.”

He thinks the process could start to become broadly available to chemical engineers within five to 10 years.

It is not the first time that scientists have drawn inspiration from plants when considering novel ways to manufacture pharmaceuticals.

In 2012, the U.S. Food and Drug Administration approved a drug called Elelyso from Pfizer and Protalix Biotherapeutics for Gaucher disease, a rare genetic condition, made with genetically modified carrot cells.

Other researchers are also cultivating crops that have been specially bred to produce useful medicines and vaccines in their leaves.—Reuters