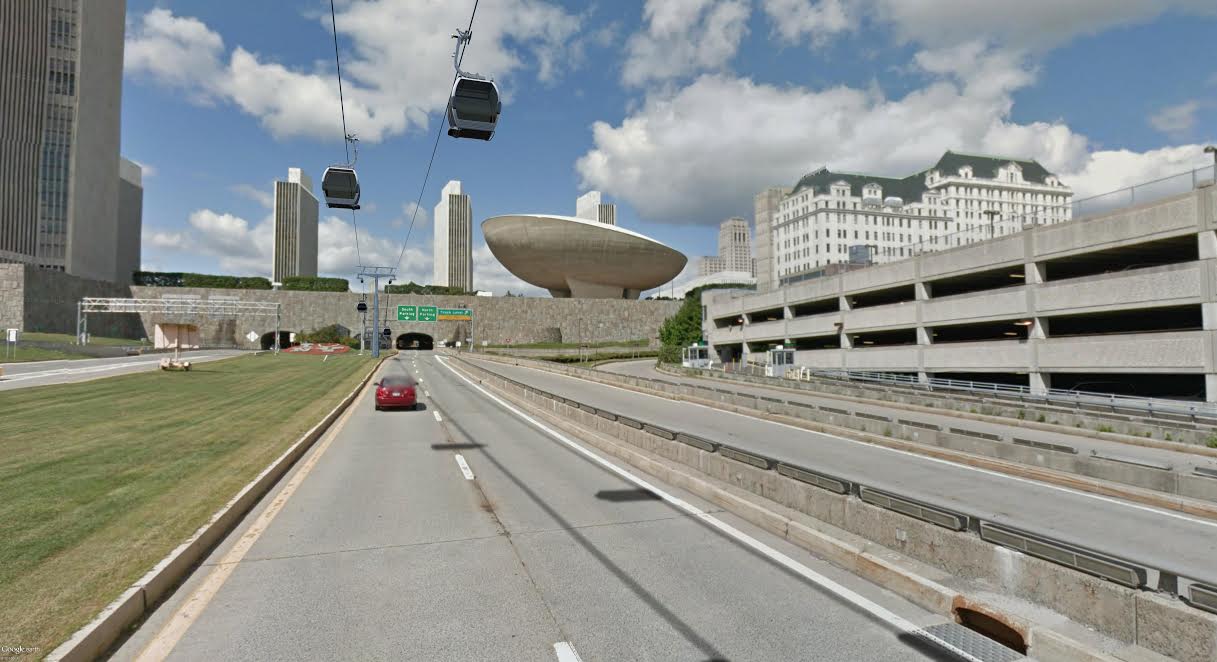 Instead of fighting traffic or waiting for a taxi, rail travellers arriving at New York’s capital may one day soar across the Hudson River in glassy pods suspended from cables.

That futuristic image could become a reality if an engineering firm’s urban gondola plan comes to fruition. It’s one of several aerial cable projects being pitched in cities from Austin, Texas, to Washington, DC, to solve public transportation problems by going above the existing maze of congested highways, bridges and rails.

“We haven’t seen any major adoption in North America, but there has been so much change and such growth in the technology in the last decade that it’s only a matter of time,” said Toronto-based urban planner Steven Dale, who created The Gondola Project to provide technical assistance for such ideas.

Cable-propelled urban gondolas are similar to those used for decades to transport skiers up mountains. While there are only a couple used for public commuter transit in the US — Portland, Oregon’s Aerial Tram and New York City’s Roosevelt Island Tramway — the technology is quickly gaining traction in European countries such as Italy, Germany, Portugal and France.

In the US, gondola projects have been proposed, with varying degrees of interest, over the Potomac River between Georgetown and Rosslyn, Virginia; across the centre of Austin, Texas; from downtown Miami to the Marlins ballpark; across New York City’s East River; and along an eight-mile route from Branson Landing to Silver Dollar City in Branson, Missouri.

In Albany, the gondola is aimed at a specific problem: The city’s busy Amtrak station is actually located across the Hudson River in the city of Rensselaer, a 1.3-mile cab ride from the downtown government and entertainment district where most people are headed. Travellers have long complained there are never enough taxis and people often have to wait or share.

“I took Greyhound from New York City and thought I’d walk from the Albany bus station to the train, since it’s only a mile,” said Rosemary Scheibel of Auburn as she waited for a train. When she discovered there’s no way to walk along the elevated highway and bridge over the river, “I had to pay $13 for a taxi,” she said.

The gondola plan would offer up to 1,200 riders an hour the chance to soar 100 feet above the Hudson in enclosed, air-conditioned eight-person cabins with an expansive view of the river and Albany’s skyline. The trip would take about five minutes, and like a ski lift, the cars would move continuously, slowing enough that even people in wheelchairs can easily get on and off. — AP

“It’s an elegant solution,” said Albany Democratic Mayor Kathy Sheehan. “There are those who say, ‘Why do we need it?’ But there has been more interest than scepticism.”

West Nyack, New York-based McLaren Engineering Group, which pitched the idea, estimated construction at between $17 million and $20 million, with annual operating costs of about $2.4 million. If approved by a series of state and federal agencies, McLaren says costs could be covered by a mix of private and public funds, ticket revenue and advertising.

“The purpose is twofold,” said Peter Melewski, national director of strategic planning for McLaren. “One is to solve a transportation problem. The other is as a natural draw for tourism.”

Gondola proposals have been slow to gain traction in the US, with objections including “pie-in-the-sky” scepticism, political opposition and residents’ concern about privacy with commuters peering down on their homes. Dale said a lack of accessible research was another roadblock before he launched his information center.

“And no city wants to be first,” Dale said. “They want to be able to point to someone and say ‘We can do it, too.’”

Will Handsfield, transportation director for the Georgetown Business Improvement District, which is promoting the Potomac project, said cable gondolas provide an alternative in areas where new highways or rail systems are too expensive or impossible to fit.

“I think it would be useful,” said 19-year-old Abbey McGrath as she waited for a train. “And it would be super interesting.”