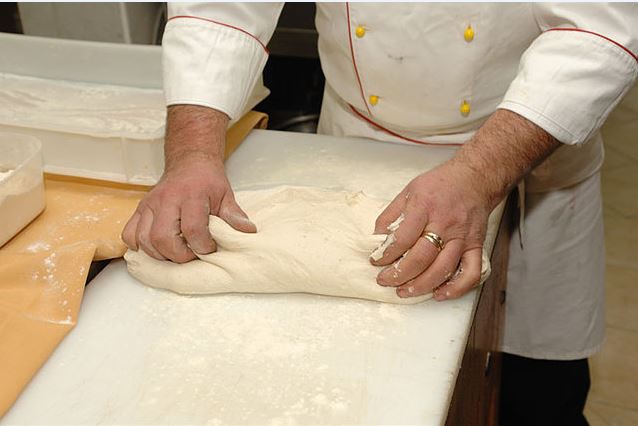 If it were not for the locked doors, knives chained to the table and uniformed staff, the food factory inside Taoyuan women’s prison would resemble any commercial kitchen.

They are part of a burgeoning food industry in Taiwan — artisan snacks, made behind bars.

The additive-free delicacies made by prison inmates have gained a loyal public following, and generate hundreds of millions of dollars each year.

Demand is driven by quality and affordability after a string of food safety scandals has made Taiwan consumers extra vigilant.

Some prisoners, like 39-year-old Chen, had little culinary experience before joining the production line in Taoyuan, in the north of the island.

The prison rolls out a wide range of snacks, from sweets to fermented tofu.

“I didn’t know how to use a kitchen knife properly before as my mother always cooked for me and I didn’t need to go into the kitchen.

“I’ve learnt that it looks simple to make food, but it’s actually quite complicated.”

Inmates near release or parole can apply for the programme and are prioritised. Long-term prisoners who are judged to have behaved well or have relevant experience can also apply.

The range of jail-made food bought from prisons across Taiwan includes local favourites such as pineapple cake and peanut brittle, as well as soy sauce and free-range chicken.

What started in 2006 as a smaller programme designed to teach inmates practical skills and raise funds for prison facilities has now been rolled out to all of Taiwan’s adult jails.

More than 50 prisons make around 300 types of product which can be ordered by the public by phone, online or by fax, or bought direct from prison offices.

“We use good ingredients and we do not use additives or over-process food to make profits,” said Chiu Hung-chi, deputy chief of the Agency of Corrections.

“Our foods are natural, high quality and inexpensive,” he added.

It is a winning sales pitch to a public wary after big-name companies were found to have adulterated their products with banned chemicals or recycled “gutter oil” to lower costs, which led to massive recalls of food items in recent years.

Shoppers at a food fair in central Taichung city organised by the agency were quick to vouch for made-in-prison food.

“I’ve been buying food made by inmates regularly for more than a year. They are organic, good quality and relatively cheap. I also rally my friends to place orders together,” said businesswoman Wang Lung-feng, who drove nearly two hours from southern Tainan city to the fair, which lasted four days and drew thousands of visitors.

“I think the programme is very meaningful. The inmates are learning some skills that can help them find work and readjust to society,” she told AFP.

Inmates earn an average monthly “labour allowance” of around Tw$2,000-3,000. Some responsible for top-selling items, such as soy sauce made in a prison in southern Pingtung county, can make 10 times the average pay during peak holiday seasons, according to Chiu.

Besides producing their own brand of food, some prisons make soaps and handicraft, or take orders from local factories to manufacture garments, paper bags and accessories.

Inmate Chen said she hopes to launch her own small food business after her release.

“My mother loves to cook and she cooks well. She said as long as I am not afraid of hard work she will work with me to start our small food business.

“I hope to combine my mother’s cooking with what I’ve learnt to create better food.”—AFP