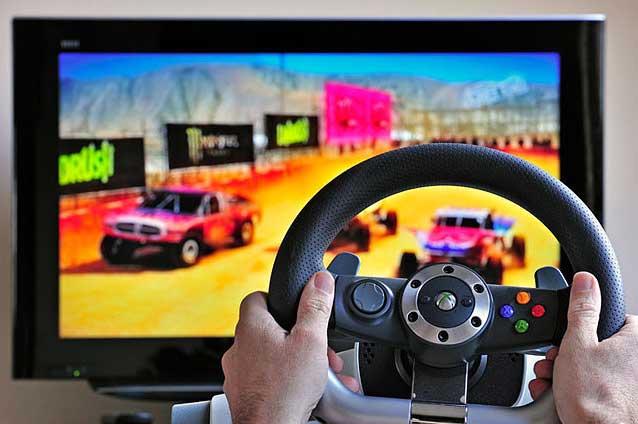 I recall a story my grandfather used to tell about his early driving experiences. He claimed he first got behind the wheel at the age of seven. And when he was nine, he was stopped for underage driving. But the judge threw out the case, because there was no legal minimum driving age back then, and no driver’s licenses either. That would have been around 1911.

Nowadays, most Americans learn to drive when they’re 15 or 16, and getting that learner’s permit is a rite of passage for teenagers. I remember learning to drive in high school. I even got credit for taking an after-school course in driver’s education. We sat through lectures and watched movies about safe driving. And then the instructor took us out in groups of four to get some “on the road” experience. During a driving session, we’d each get about 15 minutes behind the wheel, but when it wasn’t our turn, we were supposed to be observing the driver from the back seat, learning from his mistakes.

Really though, I have to credit my father for teaching me how to handle a car. He would let me do the driving when we ran errands, and it was his advice and feedback that still sticks with me today. Three decades later, I taught my son and daughter to drive as my father had taught me, and both of them passed their road test without taking a formal driver’s education course.

In the end, driving is something you learn by doing, and no amount of time spent in the classroom or observing others is going to make you a competent driver. Still, learning to operate an automobile isn’t a difficult process. It doesn’t require a high degree of intelligence or talent, and nearly everyone passes their driving test eventually, if not on their first try.

However, becoming a skillful driver who can handle the car agilely and deal appropriately with ever changing road conditions takes many years of experience behind the wheel. And even among veteran drivers, some are more prone to accidents than others. Australian psychologist Mark Horswill studies high-risk and low-risk drivers, and he thinks the difference between them lies in their ability to anticipate hazardous conditions before they occur.

Take for instance driving on a busy freeway. High-risk drivers tend to focus their attention on the car in front of them. When that car’s brake lights go on, they move their foot to the brake pedal. However, Horswill has found, low-risk drivers scan farther ahead, and when they see brake lights coming on several cars up, they prepare to slow down as well. More generally speaking, low-risk drivers are better at recognizing potentially hazardous road conditions, but driver’s need decades of experience before they reach peak performance.

Researchers like Horswill use a variety of laboratory techniques to measure hazard-perception ability. In one method, drivers view video clips that simulate the driving experience, and they’re asked to press a button each time they anticipate a dangerous situation is about to occur. People’s reaction time in this task correlates well with their actual performance on the road, as measured by their history of driving accidents and citations. It’s also a good predictor of future performance among novice drivers.

The correlation between hazard-perception and on-the-road driving performance led Horswill to ask whether there’s an effective way to teach hazard perception. First, he looked at traditional methods, such as listening to classroom lectures or watching films about driving hazards. Not surprisingly, neither of these methods led to improved scores on a hazard-perception test.

However, Horswill and his fellow researchers have found some training techniques that do improve hazard-perception scores. One method first involves listening to an expert driver deliver a running commentary of a traffic film. The novice driver is then asked to narrate events while watching a similar video. This act of narration forces the person to attend to—and hence become aware of—potentially dangerous situations on the road.

In a second method, drivers watch a video clip that stops just before a hazardous condition occurs, and they’re asked to describe what they think will happen next. They then hear an expert driver’s prediction before they get to see the actual footage of what occurred. Thus, they get to compare their own prediction not only against reality but also against the prediction of a seasoned driver. In other words, the trainees get to see that accurate predictions are possible.

A third method is especially effective at teaching visual scanning techniques. Novice drivers view a series of driving films, and they’re asked to look for and point out any potential hazards. Clearly, intentionally looking out for potential hazards is an important component to hazard-perception.

All three of these techniques, especially when used in combination, lead to improved scores on a hazard-perception test. This is true not only immediately following the training but also three months later. However, it’s still unknown whether this training leads to permanent changes in hazard perception, and long-term follow-up studies are still needed.

Finally, there’s the question of whether hazard perception training actually leads to better performance on the road. Some evidence suggests that it does.

In one study, California teenagers who’d just passed their on-road driving test were asked to do a 17-minute computerized hazard-perception training session. When compared with similar teens who hadn’t undergone the special training, the males in this group—but not the females—showed a 24% reduction in traffic accidents over the next year. (It’s still unclear why the females showed no improvement.)

A second study in the United Kingdom has found a positive effect on a much larger scale. Since the U.K. started administering hazard-perception tests as part of its driver’s licensing procedure, there’s been an 11% reduction in traffic accidents among those who took the test compared with those who didn’t. Researchers estimate that hazard-perception training has prevented over 8,500 damage-only accidents and more than 1,000 injury accidents each year, saving almost 90 million pounds (or 130 million dollars) in accident-related costs annually.

It’s not at all clear that letting your teenagers play video games like Grand Theft Auto will lead to improved driving skills on the road. However, driving researchers have shown that time spent in front of a computer screen with the right materials can result in better performance behind the wheel.