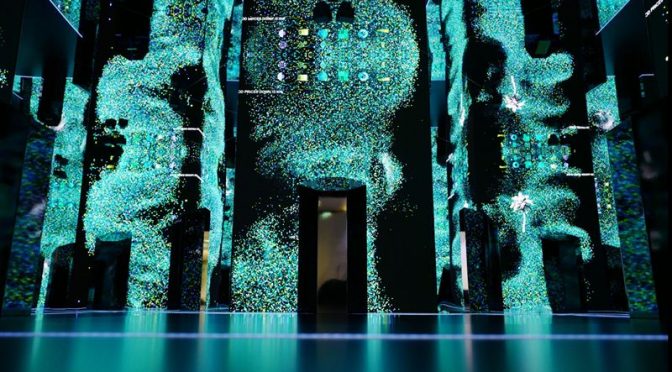 The exhibit, called the “Moral Machine”, was unveiled during the futuristic museum’s participation at the World Economic Forum annual meeting in Davos-Klosters, Switzerland.

The “Moral Machine” is set to tour various locations of the world in the coming year to gather even more input from experts and citizens, Dubai Future Foundation said in a press release.

The exhibit took visitors to the year 2050 and demonstrated to them the role of artificial intelligence in setting government polices. It had interactive features that enabled visitors to help machine set the ethical fundamentals for future government decisions.

For example, it can help advise governments on whether they need to adopt artificial intelligence in medical solutions, accepting any potential concerns, or choosing public safety by disregarding the advancements in technology.

The Museum of the Future, launched by His Highness Sheikh Mohammed bin Rashid Al Maktoum, Vice President and Prime Minister of the UAE and Ruler of Dubai, features innovation laboratories that explore how emerging technology impact the most important areas of our lives. such as healthcare, education, smart cities, energy, transportation, security. It also offers one of the world’s best innovative environment to address the challenges facing future cities.

“The Dubai Future Foundation is keen on supporting all efforts directed towards building a better future. The exhibition of the Museum of the Future in Davos-Klosters is one of our efforts in understanding how to utilise future technologies such as artificial intelligence to improve human lives,” said Abdulla bin Touq, Acting CEO of Dubai Future Foundation.

The museum embodies the government’s vision to position the UAE and Dubai as a global hub for exploring and shaping the future, he said, and noted that it serves as an initiative for testing ideas, developing technical solutions and incubating innovations.

It seeks to become a global platform that identifies future trends in the scientific and technology fields, and serve as a core pillar in setting orientations that contribute to shaping policies and strategies that enable governments around the world to benefit from future technologies, Bin Touq added.

The Museum of the Future project is the first of its kind in the world in harnessing artificial intelligence for community, experts and leaders to make the most important government future decisions. It allows governments to gather the feedback of the community to develop plans and policies for the future.

From its headquarters in Dubai, the Museum of the Future attracts researchers, inventors and research centres, companies and financiers to work under one roof, by providing an integrated environment to test ideas and develop practical models that can be financed and promoted within the same environment.

The museum is gearing up to organise a number of events such as a permanent exhibition of the future techniques, a series of advanced research sessions that emphasise on the latest scientific findings in all fields as well as specialised workshops and scientific conferences throughout the year to discuss all the latest developments and future scientific trends and their practical application, the foundation said.—WAM