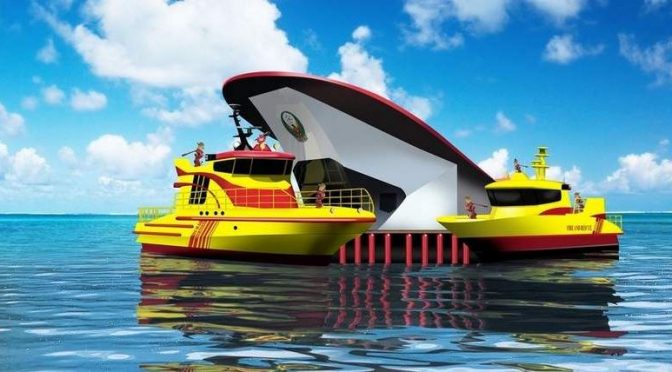 A floating civil defence centre and smart system to put out fire on waters were launched by the Dubai Civil Defence at Intersec, a three-day security and safety exhibition, which began on Sunday at the World Trade Centre.

According to Major-General Rashid Thani Al Matroushi, Director-General of Dubai Civil Defence, the smart system – Dolphin – extinguishes fires on ships and beachside buildings, adding that a diverse package of smart applications will be launched on the sidelines of the three-day event.

The projects will be a beginning of a new phase of the technical development of civil defence services, he added. Major-General Al Matroushi also launched a conference on fire safety on the sidelines of the event.

The floating civil defence centre provides manpower and the mechanism to reach offshore fire sites, buildings and other facilities, which facilitates rescue efforts.

In his speech, Al Matroushi said that Intersec sessions have exhibited fire protection techniques across the world, and the impact of new products in improving the safety of the people, besides the development of methodologies and applications in the field of civil defence in the region in general and the UAE in particular.

Al Matroushi inaugurated the Fire safety Conference 2017 in the presence of Colonel Rashid Khalifa Buflasa, director of fire and rescue department, and Colonel Ali Hassan Al Mutawa, assistant director-general of the Dubai Civil Defence for Smart Services, and a number of civil defence and other officials.

He said that the Dubai Civil Defence over the years was keen to introduce the latest technologies to achieve one of the strategic goals of the UAE Vision 2021, which marks the celebration of the 50th anniversary of the founding of the UAE.

He said this coincides with the completion of the infrastructure strategy to host Expo 2020, in order to dazzle the world with what will be achieved during and after the much-awaited world fair.

He confirmed that the Dubai Civil Defence will always be key partners with all government agencies and private companies in order to make the UAE one of the best countries in the world in terms of safety and security.

First Lieutenant Tahir Hassan Al Taher, head of the inspection and permitting department at Dubai Civil Defence, presented Emirates Guide for Fire Protection and Safety of Life based on the analytical studies of accidents and in accordance with the requirements of the time.