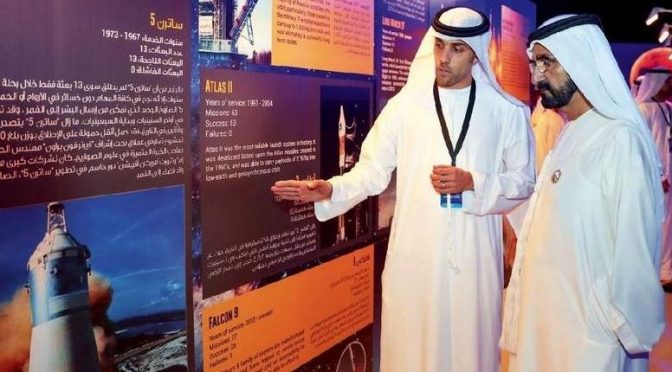 His Highness Shaikh Mohammed bin Rashid Al Maktoum, Vice-President and Prime Minister of the UAE and Ruler of Dubai, attended the first session of the Project Space Forum at the Dubai World Trade Centre on Tuesday.

Shaikh Maktoum bin Mohammed bin Rashid Al Maktoum, Deputy Ruler of Dubai, accompanied him. Shaikh Mohammed also toured the museum of the centre, and was briefed about some of its components.

Shaikh Mohammed hailed the forum which is, he said, “a global platform that gathers scientists across the globe together with Emirati youth in this field, who will benefit from the participating experts’ experiences.

Shaikh Mohammed also expressed his pride at the Emirati youth and his own and all national institutions’ support for them in order to maintain their aspirations to keep pace with international levels in this strategic sector, which is given wide attention and continuous follow up by the country.

Prof Noureldine Malak from the University of Massachusetts in Boston spoke about the scientific discoveries for incurable diseases and therapies since the era of the Arabic scholar Ibn Al Haytham, about 1,000 years ago. He also spoke about the latest developments and solutions in the medical treatment for these diseases that are still subject to a number of scientific research and studies.