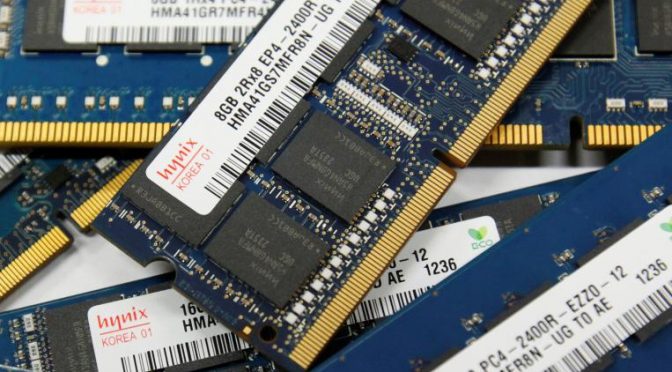 The global memory chip industry is heading into what’s been dubbed an ultra-super-cycle, as the challenge of making chips smaller yet more efficient has created supply bottlenecks, while there is soaring demand for data storage – from smartphones and artificial intelligence to autonomous driving and the Internet of Things.

“We expect an ultra-super-cycle instead of just a super-cycle in the 2017 DRAM industry,” said CW Chung, an analyst at Nomura, referring to memory chips used in smartphones and computers for short-term data processing and storage.

For example, Samsung Electronics, the world’s biggest memory chipmaker, this week reported record quarterly operating profit of 4.95 trillion won ($4.26 billion) at its chip business, and its stock price has risen 77 percent over 12 months, a period that includes one of the consumer electronics industry’s most damaging product faults.

“As of the end of the fourth quarter, our DRAM inventory in particular has gotten tight compared to the previous period after we actively responded to demand,” Chun Se-won, Samsung Electronics senior vice president, said after the earnings.

Samsung did not detail its inventory levels, but some analysts reckon its DRAM inventory level fell to less than a week at end-December, from nearer a month a year ago.

Toshiba, which may sell part of its core chip business for unrelated financial reasons, said it is receiving orders beyond its capacity for NAND chips, and SK Hynix, while meeting orders for now, warned that an industry-wide shortage of NAND chips will likely persist this year.

Leading Chinese smartphone makers such as Huawei and ZTE declined to comment on chip supplies. Alibaba-backed Meizu said it has no problems in its smartphone launch or shipment plans. “We have a long-term agreement with our suppliers that … guarantees more than 3 months of supply at any given moment,” global branding manager Ard Boudeling told Reuters.

Distributors, however, say tight supplies mean there are some severe shipping delays.

“So much so that many are active in the secondary market to procure the needed supply, often at large premiums to contract pricing,” said Tobey Gonnerman, executive vice president at U.S.-based component distributor Fusion Worldwide.

He said there are delivery delays of 8-12 weeks for certain chips, and, in some extreme cases, no delivery date confirmations at all.

SK Hynix Vice President Sean Kim said customers resisted the price hikes in contract negotiations for the first half, “but ultimately, negotiations were concluded at much higher prices.”

“I think they expected prices wouldn’t fall significantly even in the second half, and decided to build their inventory in advance,” he added.

Samsung appears best placed to benefit from the market cycle given its early and heavy investment in new technology, particularly in 3D NAND chips, which are in demand from high-end storage products used in data servers.

“The advantage Samsung has over everyone is simply their investment,” said a person at one of the South Korean giant’s competitors, who declined to be named as he was not authorised to speak to the media. “Their projected investment in 3D NAND this year, according to analysts, is bigger than our entire capex plan for the year.”

Samsung spent 10.6 trillion won on memory chip capex last year, and has yet to announce spending plans for this year.

The shift to next-generation technologies is not just costly, it has also created production bottlenecks.

BNP estimates memory capital spending in 2016-17 will be 80 percent more than was spent four years ago, but returns on those investments are diminishing: $1 billion spent this year will grow shipments by around only a third of what chipmakers would have recouped from the same amount in 2012-13, BNP said.

Samsung expects global NAND chip supply will grow by around 30 percent, while Nomura expects demand to rise by 42 percent.

“They (chipmakers) are now in the enviable position to choose what to make and who to sell to, and raise pricing levels even further,” said Fusion Worldwide’s Gonnerman.

“They seem to have the luxury of choosing where to focus their production, and wherever they choose will result in growing the shortages on other product families.”