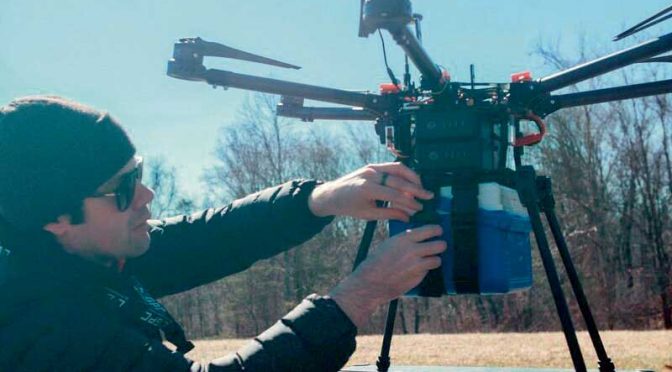 Drones are an efficient, cost-effective and potentially life-saving method of transporting blood samples, products and organs and may one day be as commonly used as ambulances or helicopters, according to experts from John Hopkins Medicine.

In what is believed to be the first study of its kind, researchers at Johns Hopkins have determined that large bags of blood products — such as those used in transfusions — can maintain vital temperature and cellular integrity while being transported by specially-modified drones that come equipped with a hardened, temperature controlled cooler.

In an interview with Khaleej Times, Johns Hopkins’ Dr Timothy Amukele noted that the rapid transportation of medical products is vital especially in areas in which “transport is an issue.”

“The impact it has depends on what you’re moving. In the case of an organ, for example for transplant, (speed) is the difference in getting an organ or not getting an organ … it’s life or death,” he said. “If the organ is delayed past a certain amount of time, it’s not useful.”

In the case of transporting blood products, such as those taken from a donor, controlling temperature and vibrations while in flight is of the utmost importance, Dr Amukele noted.

“For packed red cells, for example, they have to be between zero and six degrees celsius, or it’s no longer viable,” he noted. “There’s also hemolysis, which is basically cells breaking open. It’s like an egg, which is useful in its shell, but when it’s broken is just a mess. We needed to make sure there wasn’t hemolysis from the vibrations of the drone engine.”

To make sure that blood arrives in good condition, the research team customised the drone to ensure the engine was separate from its cargo package, which was lined with foam inserts to prevent excessive vibrations.

Dr Amukele noted that there are engineering, biological and regulatory challenges that need to be solved before drones are adopted for medical purposes on a wide scale.

“In terms of engineering, we already have drones that are commercially available that can do what we need, to move medical supplies between hospitals, but it can be improved on,” he said. “But we still don’t have a robust engine that can go over long distances without changing the battery, and we need the capabilities to communicate with a drone over those distances. People are working on that, but I think we’re probably three years out.”

“The medical piece, the stability of the substances, so far seems to be pretty stable under the conditions we’ve looked at,” he added. “The regulation, however, is lagging behind technology and public acceptance. But it will catch up.”

The benefits of drones

Eventually, drones will be useful in both urban and rural environments, particularly in cases in which smaller facilities need to get units of blood from larger, better stocked facilities.

“This is true everywhere in the US, and it’s true all around the world,” he said. “But the need maybe more dire in rural areas.”

Drones, he added, are likely to be implemented in healthcare before being used in other sectors, due to the relatively simple — and never-changing — flight plans that would be needed and the urgency of medical requirements.

“If I’m a hospital, I’m going from point A to point B, and that track is very clear,” he said. “The flight plan can be approved and monitored by the government and will never change.”

“Applying them to healthcare helps drones make more sense,” he said. “From a big picture standpoint, we’re used to getting shoes from Amazon whenever they come. Nobody sees the need to get shoes in minutes as opposed to a day. Once it comes to healthcare, that need is much more obvious.”

Looking towards the future, Dr Amukele noted that drones will never totally replace current methods of medical transport, but will become a common tool used alongside them.

“In the future, it will be one more option. It won’t replace an ambulance, but hospitals will have ambulances, cars, and a drone fleet as part of the package,” he said.

Several ideas for the application of medical drones have already been proposed and experimented with locally. At the 2015 UAE Drones for Good Awards, for example, one Emirati team proposed teaming up with DHA to use drones to deliver medicine to the elderly and special needs patients, as well as deliver blood, medical kits, and test results.