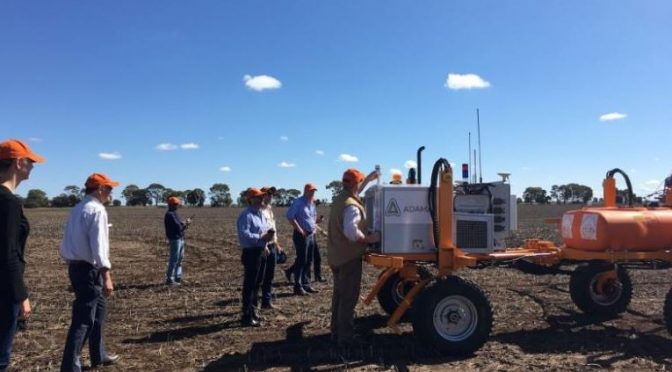 Parts of Australia’s farming industry are rushing to recruit a new generation of tech-savvy graduates as the sector swaps its bucolic past for a future of drones, robots and automated sensors.

The push comes as cutting-edge machinery is used to plug a labour shortage on the nation’s remote farms that threatens to derail its ambitions to become Asia’s food bowl.

“For the first time in many years, we’re finding it easier to attract graduates because agriculture, particularly technology in agriculture, is back on the radar,” said Felicity Hennessy, general manager of innovation at agribusiness Ruralco (RHL.AX).

For years, potential recruits to Australian agriculture have been turned off by the harsh image of traditional farming, but a marked acceleration towards automation has piqued the interest of young generations, with jobs available to do everything from developing crop-protecting drones to crunching data on cattle nutrition.

“The proliferation of drones and sensors are the key drivers,” said Hennessy, adding that Ruralco’s graduate programme had seen a rise in the number and quality of applicants.

While Australia is among the world’s leaders in robotics for outdoor use, having given birth to the first robot to round up cattle, the A$4 billion agriculture technology industry is still in its infancy. It is mainly just a few companies that are big enough to recruit.

The nation’s largest cattle firm Australian Agricultural Company (AACo) (AAC.AX) is one of the local firms in the sector that has regularly been hiring tech-savvy youngsters.

“Interest in agriculture is rising, from engineers to science-type graduates,” said Gerard Davis, who heads a team of seven in an innovation department at AACo that started under three years ago.

Data from Rimfire Resources, a recruiting firm specialised in farming, showed 4,600 agricultural jobs were advertised on the internet in 2016, from an average of 3,750 in the past three years.

“It is difficult to say whether the increase is driven by technology, but there is a clear shift for off-the-farm roles,” said Nigel Crawley, a director at Rimfire Resources.

DOWN ON THE FARM

New degrees such as agri-sciences are being added by universities, with a sharp rise in students who do not have a farming background.

City-born engineering student Michael Forrai had never set foot on a farm, but as part of his studies is now testing weed-spraying functions on robots in wheat fields near Emerald, a remote town in the state of Queensland.

“I had never heard of Emerald before and really would have never expected to work on a farm,” said the 30-year-old student from the University of Sydney. “Now, I see it as an amazing opportunity … I am definitely considering staying in agricultural robotics.”

But competition is stiff for agricultural companies looking to recruit engineers or tech graduates.

“We have to be looking all the time,” said Matt Pryor, the founder of water and livestock sensors maker Observant, citing companies in aerospace, automotive, finance, healthcare and e-commerce vying for the candidates.

The 13-year-old company employs a staff of 12, having added three technicians last year.

“We changed our mindset from being position-focused to talent-focused and that can be tough because you may take somebody before the business is ready,” said Pryor.

“In a competitive market, you have to be at market price or above,” he said, declining to give more details.