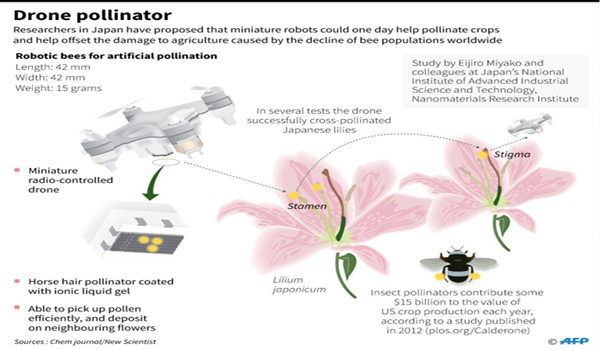 Small drones coated with horsehair and a sticky gel could one day help pollinate crops and help offset the costly loss of bee populations worldwide, researchers in Japan said Thursday.

The miniature robots described in the journal Chem are a long way from being deployed in the field, but researchers say they may offer a partial solution to the loss of bees due to disease and climate change.

“The findings, which will have applications for agriculture and robotics, among others, could lead to the development of artificial pollinators and help counter the problems caused by declining honeybee populations,” said lead author Eijiro Miyako, a chemist at the National Institute of Advanced Industrial Science and Technology (AIST) Nanomaterials Research Institute.

In 2007, Miyako began experimenting with liquids that could be used as electrical conductors.

One failed attempt produced a sticky gel, like hair wax, which he relegated to a storage cabinet for almost a decade.

The gel was rediscovered during a lab cleanup, and its unchanged nature gave Miyako an idea.

He began experimenting with houseflies and ants, applying the gel to them to see if it could help pick up pollen from tulips in a box. It worked.

Then he moved to drones, coating them with horsehair to mimic a bee’s fuzzy coating.

He added the gel to their undersides and flew them over pink-leaved Japanese lilies (Lilium japonicum).

“The robots absorbed the pollen and then could be flown to a second flower, where the grains were deposited, artificially pollinating the plants and causing them to begin the process of producing seeds,” said the study.

Pollinators contribute some $15 billion to the value of US crop production each year, and they are needed worldwide for one-third of edible crops.

Someday, artificial pollinators might be called on to help.