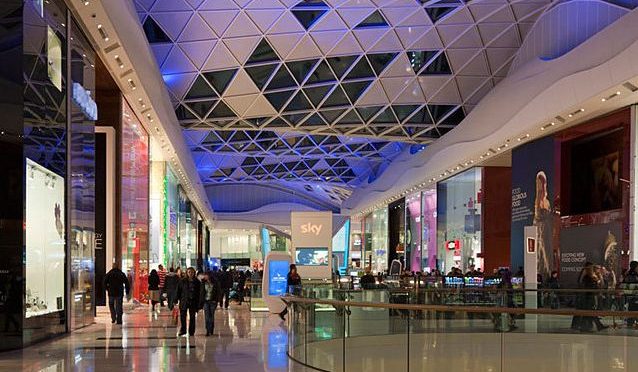 Want a coffee while you shop? A glass of wine? Those are just few of the gimmicks being rolled out by retailers as they fight to boost store traffic — and ensure their survival in the Amazon era.

Stores are testing artificial intelligence programs to guide shoppers through their aisles, and swipe-right, swipe-left games, that borrow from dating apps to offer them personalized pickings.

Others have added coffee shops, restaurants and even alcohol in an attempt to drag consumers away from their laptops and back in the dressing room.

“It has to be a better experience” and not just “a simple warehouse of goods,” said Chris Donnelly, managing director at Accenture Strategy, a business consultancy.

“There’s got to be more of an emotional, experiential connection.”

The new tech and add-on perks look set to become even more critical following another bad holiday shopping season that has sharpened focus on the oversized US retail footprint.

Experts predict some brick-and-mortar stores will survive the period of reckoning, but there will be fewer of them, and the survivors will be more customer-friendly.

A recent Accenture report predicted the next decade will be “the golden age of the consumer,” offering a “growing array of products and services, often personalized to their specific needs and wants.”

But with that comes disruption and Accenture warned of a painful shakeout ahead as old-fashioned malls close and jobs are lost.

Retailers are showing signs of the strain.

Macy’s last month announced plans to close 100 stores and eliminate some 10,000 jobs and reportedly has approached rival Hudson’s Bay over a potential merger.

Those woes have sparked a greater willingness to try new things.

Industry insiders are bullish on greater use of hand-held tablets so employees can call up a client’s purchase history or parry questions from well-informed customers about pricing and product information.

Retailers also are turning to data analytics, and IBM is working with them to make use of big data from smartphones on customer patterns, for example to see if shoppers are visiting the shoe department but not buying anything.

Chains like Target and Macy’s have even hired their own engineers to review data.

But the new technologies come with risks. Nordstrom in 2013 said it was pulling the plug on a smartphone tracking program after some customers raised privacy concerns.

Retailers also are divided on how to make use of ubiquitous mobile apps. Some view them as valuable tools — notably for sending promotions or coupons to customers in or near their stores.

But others say mobile apps can detract from the in-store experience.

“When they come to the store, you don’t want them to interact with the app,” said Ronny Max, a retail industry consultant who specializes in behavior analytics.

“The whole point of them coming to the store is so they can interact with the store.”

One new feature generating interest is the interactive dressing room, unveiled at Ralph Lauren’s 5th Avenue flagship store in New York and a handful of other stores.

The technology, developed at Oak Labs, a company started in 2015 by former eBay employees and others, gives customers an electronic link to staff while they are trying on clothes.

Customers can request different sizes and colors without having to get dressed again and go back into the store.

“You’ve shown a lot of intent if you’ve picked up an item and gotten undressed,” said Michael Franklin, co-founder and chief business officer at Oak Labs.

Oak Labs declined to provide pricing details, but claims the technology boosted average purchases by 55 percent in the handful of places it has been tried.

Fans of the technology say it also can play a role in managing inventory and addressing problem items, such as a jacket that is repeatedly tried and set aside because of poor fit.

But analysts doubt that such deluxe dressing rooms can be a silver bullet for the sector: high costs mean there is little chance of them being rolled out widely in the United States anytime soon.—AFP