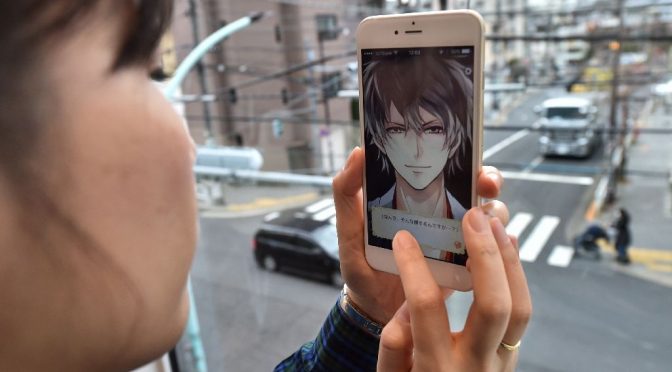 Japanese book editor Miho Takeshita is having an affair. But the recently married 30-year-old is not worried about getting caught — her boyfriend only exists on a smartphone.

Takeshita is a fan of romance simulation games, a booming market in Japan that is winning the hearts of women looking for some unconventional loving.

“Even though the game characters aren’t real, you start to develop feelings towards them.”

That is the whole point, said Natsuko Asaki, a game producer at Cybird, which created the popular series Ikemen — a Japanese term for handsome guys.

“The story is most important, as well as the characters, and the twists and turns,” Asaki said.

The Ikemen app has been downloaded some 15 million times since its launch about five years ago, and the firm has also released an English version.

Mirroring the smartphone boom, female-targeted virtual romance games have ballooned into a market worth about 15 billion yen ($135 million) annually in Japan, according to the Tokyo-based Yano Research Institute.

Some 80 percent of fans, including a growing number of married women, play just before bed, a Cybird survey found.

The games do not rely on complicated algorithms, but instead offer multiple choice scenarios that let players escape into a world where they create their own love story with digital hunks.

Takeshita does not see anything strange about flirting with her smartphone sweeties.

In fact, she can engage with them whenever she likes — something real-life spouses do not always provide.

“The games also have sexual overtones but they’re expressed less crudely than in simulations made for boys,” Cybird’s Asaki said.

“It’s an ideal love story — there are no female rivals and no sad endings.”

The success of these games may be partly linked to dating etiquette in Japan, where men are expected to take the lead when it comes to romance.

“A Japanese woman making the first move is not viewed favourably,” said Ai Aizawa, a marital relations specialist at the All About website, which offers daily living advice.

And even those women who have found a soulmate are often not satisfied romantically, she added.

“They use these simulations as an outlet, a place where they are not betrayed, and where ideal love and the perfect lover feed the illusion,” Aizawa said.

But is there any risk with a bit of smartphone hanky panky?

“Becoming an addict,” said one single female fan, who asked to remain anonymous.

“You can even start to feel a little guilty if you do not play regularly — it’s a bit dangerous for teenage girls who are still immature.”

Romance games are one of the culprits behind a trend that has seen some young Japanese lose interest in finding a real partner, according to a study last year by the Meiji Yasuda Life Foundation of Health and Welfare.

“The relationship that does not happen in real life happens perfectly in the game — that can lead some people to give up looking for love, at least for a time,” said marriage specialist Aizawa.

While humans can easily love a virtual partner, it is still uncertain whether that feeling could ever be reciprocated, said Hiroshi Ishiguro, a robotics designer at Osaka University.

“A male or female body is no longer the thing that defines a human being,” he said.

“It’s quite conceivable to really love robots or virtual characters — there’s no doubt about that.

“The question is more whether they will someday be able to love a human.”—AFP