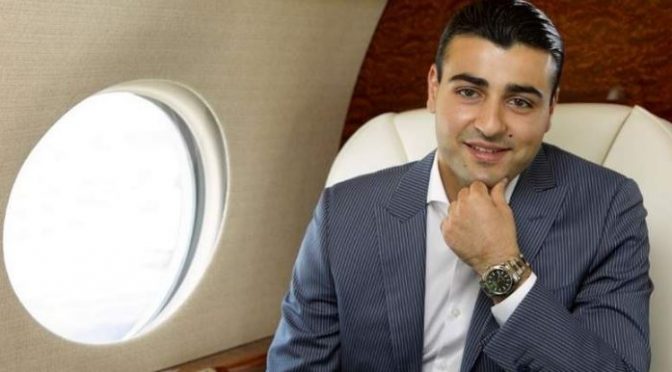 We’ve all have heard of last-minute travel planning, but is it really possible to plan your travel just minutes before jumping on the plane?

Yes indeed, and there’s an app for it.

Online platform JetSmarter offers instant pricing and availability for private jets worldwide. Being a global hub, Dubai is a major international travel destination for celebrities and personalities – from actors to sports stars, business tycoons and the ultra-rich.

Sergey Petrossov, founder, chairman and chief executive officer of JetSmarter, says his firm will be largest private aviation company in the world by 2020.

Petrossov hated the brick-and-mortar approach to booking charter. Frustrated with this experience, he began to notice mobile marketplaces were becoming popular, and decided this is the way private aircraft should be booked.

“We launched the company globally in March 2013. The GCC region and the Middle East market is of key importance for JetSmarter. Saudi Arabia is the largest GCC market for the company and a large proportion of app downloads across the Middle East can be attributed to this region.”

With over 600,000 app downloads worldwide, the company has hundreds of registered members residing in the GCC region.

Both Riyadh and Dubai are popular Middle East hubs when it comes to private travel through the app, and the firm says it is eyeing expansion across the Middle East.

Petrossov and his development team built the first beta-version of the app in August 2012, which was used by a closed group of people. Once he realised they were on to something, he decided to turn this into a full-fledged business. After raising more money and collaborating with hundreds of vendors and partners, the inaugural JetShuttle flight from Dubai to London took off on December 1, 2016.

For the first time in the private aviation industry, travellers were able to reserve seats on direct, scheduled flights between three continents – North America, Europe and the Middle East.

The company closed a $20 million Series B round in July 2015, and has also raised $56 million since inception as funding from private sources including the royal family in Saudi Arabia, A-league executives, music moguls, and more.

More recently, the firm has raised $105 million in Series C equity financing round at a $1.5 billion pre-money valuation in December 2016. This round will assist JetSmater in creating new JetShuttle routes across new regions, including Asia, China, India, South America and Africa throughout 2017.

“We have developed a focused marketing strategy specifically for the UAE market as it is the most prominent business and tourism hub in the region. Targeted communication to members, dedicated relationship managers that focus on existing relationship management, and new business development are some of our marketing criteria. We have received a lot of interest in JetSmarter across the UAE and we can say that we have around 7,000 users globally,” said Petrossov.

Recognised by Forbes as one of ‘30 Under 30’ in Consumer Technology and South Florida’s Top Working Professional by the Sun Sentinel, Petrossov co-founded two IT projects prior to JetSmarter: an online chat system for website customer service and a distance-learning platform for Russian speaking educational institutions. He also served as a board advisor to a private jet operator based in South Florida who at the time had the world’s largest on-demand Gulfstream charter fleet.

Saj Ahmad, an analyst at London’s StrategicAero Research, maintains that the target audience remains limited for such a service.

“In theory, the proposition is to allow high income earners to shun mainline airlines and instead used a specific, tailored and customised service to use a private jet. However, not everyone will be requiring immediate or urgent air travel – so this kind of service will not always have consistent demand,” Ahmad said.

“While it’s definitely innovative move, just 600,000 users worldwide shows how much of a drop in the ocean it really is,” he added.

Petrossov, however, remains bullish on the firm’s growth prospects. “We have a large membership base in Dubai, and due to the high demand, we are expanding our intercontinental JetShuttle service which will now connect three major continents – North America, Europe and Asia,” he said.

This intercontinental JetShuttle flight will make Dubai the new Middle East/Asian hub for shared private jet travel, as JetSmarter members in Dubai will now have the opportunity to jet-set to other popular European and North American destinations on JetSmarter’s scheduled flights to cities including Nice, Ibiza, Milan, Moscow, Paris, Geneva, New York, Chicago, South Florida, Los Angeles and many more.

“For 2017, flyers expect personalised experiences, while quality of service is the deciding factor as to whether a brand is considered luxury or not. Travellers are also planning ahead of time, and they’re focusing on operators that connect between two very varying travel destinations,” Petrossov said.