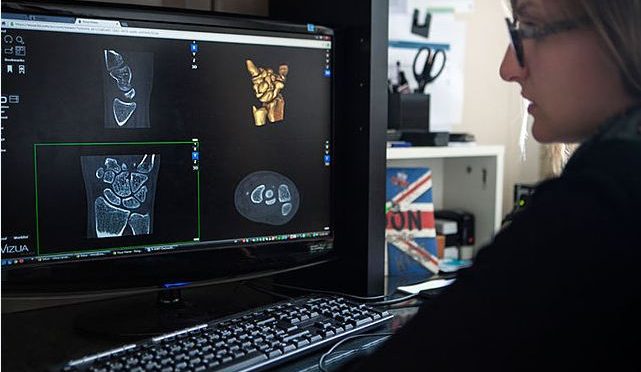 Offering hope for those suffering from spine-related problems, surgeons at a leading hospital here on Wednesday announced they have successfully implanted for the first time a 3D-printed vertebrae in a 32-year-old woman, helping her walk again after a bout of disabling spinal tuberculosis.

The team of surgeons from Medanta-The Medicity, Gurugram, replaced the damaged vertebrae with a 3D-printed titanium vertebrae to bridge the gap between the first and fourth cervical vertebrae.

“Given the complexity of this case, the use of 3D-printing technology has helped us in bringing a successful outcome. The patient today on 12 post-operative days is now walking with minimal support, all her pain has gone, her voice and dysphasia has recovered completely and, most importantly, her life was saved by this technique,” Dr V Anand Naik, Senior Consultant (Spine Surgery), Bone & Joint Institute at Medanta who led the team of surgeons, told IANS.

The 10-hour-long surgery is the first-of-its-kind for reconstruction with 3D-printed vertebrae in India and third in the world, following similar surgeries that were conducted in China and Australia for different parts of the spine.

“This is the first such surgery in India and probably third in the world by using 3D-printing technology. These techniques have opened a new avenue wherein any type of complex reconstruction can be done in the spine with less collateral damages,” Dr Naik added.

A teacher by profession, the woman was battling infertility and she suffered tuberculosis (TB) due to high intake of steroid which lowered her immunity to a level where the patient developed TB at 10 different vertebrae in the spine.

As a result, the head of the patient was sliding forward and curved in such a way that it was causing obstruction to the spinal cord.

It resulted in progressive weakness in all the limbs and increased the risk of quadriplegia, a condition linked to compression of the respiratory nerves that could lead to death.

The team of surgeons at Medanta used an intricate computer software to plan every detail of the operation.

The titanium cage was customised according to the patient’s original spine.

The high-resolution CT and MRI scans of the patient spine were uploaded on the software and a dummy of the patient’s spine was 3D printed to measure the gaps and surgical resection between the first and the fourth cervical vertebrae.

Finally, the three-dimensional titanium implant was printed, which was to be placed in the body.

The printed 3D titanium vertebrae were further tested for biomechanics and stress risers after receiving inputs from design teams in India, Sweden and the US, Medanta said.

The patient is now recovering fast with the newly-reconstructed cervical vertebrae, according to the doctors.

“We are extremely happy with the results as the patient is gradually moving back to normalcy,” said S.K.S. Marya, Chairman, Institute of Bone & Joint at Medanta.

The patient is expected to lead an independent risk-free life in about two weeks, according to the doctors.—IANS