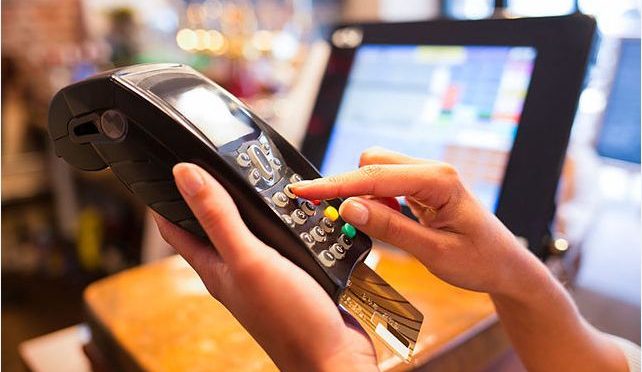 Clutching a payment terminal in one hand and a customer’s debit card in the other, 34-year-old street vendor Melisa Mbiza stands on the roadside by her truck loaded with mangoes, touting for business in central Harare.

“I’m in a hurry – please can you be quick,” said her client, one of a sizeable queue forming as Mbiza swiped the card and packed the fruit into a plastic bag.

Mbiza hummed jovially while taking debit cards from her waiting customers and doling out mangoes.

“There is very little hard cash circulating these days and if I relax, I risk going broke in business – so I have had to embrace electronic payments on the streets,” she said. Business has been good since she started using the point-of-sale machine last April, she added.

With Zimbabwe’s economy struggling and a shortage of cash as people hoard U.S. dollars, the main currency, some 230 companies shut up shop in the first half of 2016, according to the Zimbabwe Congress of Trade Unions, pushing more people into an already bulging informal economy.

But even in a high-tech form like Mbiza’s, street vending is illegal in Zimbabwe, as stipulated in local bylaws.

That doesn’t put off the vendors, who have found their own ways to cope with tough conditions, including what they describe as “harassment” by the police if they set up on pavements.

“We now often choose to come into town at night when city council police have finished work for the day,” said Mbiza.

Street vendors get some help to deal with daily challenges, thanks to civil society groups like the Zimbabwe Informal Sector Organisation (ZISO). It helps traders whose goods are seized by police to restock so they can stay in business.

“We source money from good Samaritans and the donor community, which we use to compensate vendors who lose their goods to city council police,” said ZISO executive director Promise Mkwananzi.

The National Vendors Union of Zimbabwe (NAVUZ), founded in 2008, also represents street traders, who have become a common feature in towns and cities across the southern African nation in recent years.

There are more than 1 million informal vendors in Zimbabwe, with over 100,000 operating in Harare, of whom some 20,000 peddle their wares on pavements in the Central Business District, according to NAVUZ statistics.

The number of Zimbabweans classed by government data as employed was 6.3 million in 2015, with the vast majority working in the informal sector which includes small-scale farmers.

NAVUZ Chair Sten Zvorwadza pointed to a “huge disconnect” between the government and the informal economy, highlighting the union’s role as “the voice of the voiceless”, given that many of the street vendors are women, children and young people.

“NAVUZ has mobilised vendors to seek redress on issues that have a bearing on the welfare of vendors’ rights, policy formulation and raising awareness to push the government to recognise the informal economy,” said Zvorwadza.

It has, for example, led street protests calling for an end to the harassment of vendors, and says its efforts have helped reduce the daily battles between traders and police.

Further help for the struggling vendors has come from democracy lobby groups, such as Occupy Africa Unity Square.

“Where else can the vendors earn a living if they don’t descend on the streets?” said Elvis Mugari, a member of the anti-government group. It has launched a series of legal challenges against city council police for violating the rights of street vendors, which have yet to be heard in court, he added.

NAVUZ says little or no help has been offered by the Zimbabwean government itself.

“Despite the hard work and innovative methods being displayed by vendors plying the streets, no support has come from the government to encourage growth in the informal sector or to create conducive working environments,” said Zvorwadza.

The government, however, says it is doing its best for the growing ranks of vendors.

“We have come up with designated points where we have erected proper and modern market stalls around towns and cities to enable vendors to conduct their business in an orderly fashion,” said an official from the Ministry of Local Government, who spoke on condition of anonymity as he was not authorised to talk to the media.

But for millions of vendors here, any government assistance has been far less than what they need.

“The market stalls the government brags about are far away from town where we have many customers – plus the stalls are too few,” said Charlene Chauke, a vendor and NAVUZ member.

Many traders like her and Mbiza say they have not benefited from any government help.

“Only vendors who are known to be loyal supporters of the ruling party ZANU-PF here may be getting favours from government,” she said.

For vendors like Miriam Ngulube, aged 27, it is survival of the fittest as she sells cooked food from her car boot on Harare’s streets, while trying to evade detection.

“My car has become my restaurant, as I try to move on with my business without attracting the attention of the council police,” she said. “I can’t afford to rent a proper restaurant and so I just prepare food at home and bring it in my car to sell here on the streets.”—The Thomson Reuters Foundation