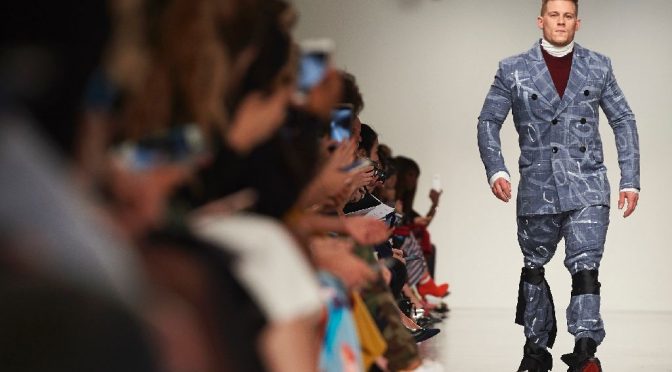 Disabled models made their debut on the London Fashion Week catwalk on Friday — “about time”, as one campaigner put it.

Amputee Jack Eyers, who wears a prosthetic leg, and Kelly Knox, who was born with no left forearm, took to the runway for luxury British label Teatum Jones.

“It’s important to get people to reconsider our relationship with the body in the luxury fashion sector,” Catherine Teatum, one half of the design duo, told AFP backstage.

“When you think there was a time when models of colour weren’t cast for shows, that’s bonkers! So we feel a little bit like that now.”

The collection, which opened five days of shows in London, featured oversized coats and dresses, reconstructed with sheer layers, eyeleted seams and ties around the waist and legs.

Dubbed “The Body”, it took as inspiration the work of artist Hans Bellmer, who created mutated doll forms in protest at the cult of the perfect body in what would become Nazi Germany.

“As a brand we’ve always been inspired by human stories, wherever they’re from,” added co-designer Rob Jones.

Eyers previously made history when, in February 2015, he became the first male amputee to appear at New York fashion week, in creations by Italian designer Antonio Urzi.

His lower right leg was deformed from birth and he took the decision to amputate when he was 16.

“When I lost my leg I become very unconfident, whereas fashion gives you that sense of confidence,” he told AFP.

His agent had previously put him forward for London shows, but with no luck.

He puts it down to many designers being “very British — they don’t want to offend people.

“In America, they use it as a sob story!”

“It’s been something everyone wanted to avoid,” she added.

“I think they’ve finally woken up to the idea that this is really important. And people want to see great-looking models, irrespective of disability.”—AFP