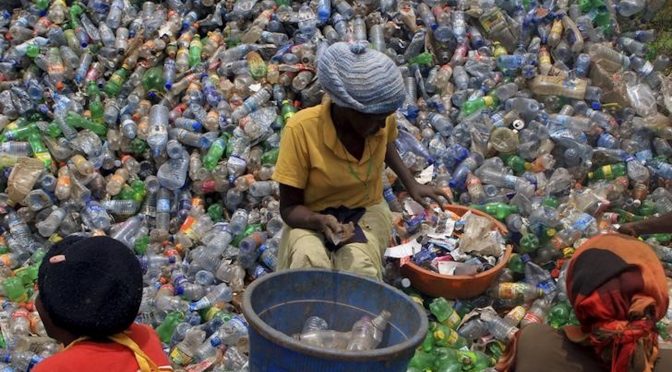 A young Tanzanian entrepreneur is turning the country’s mounting plastic waste into “lumber” to help meet demand for housing in its growing cities, in an effort to reduce depletion of forests.

Christian Mwijage decided he could tackle those problems in one go – by turning discarded plastic bottles into building materials that can be used instead of wood.

His year-old company, EcoAct Tanzania, has transformed nearly 1 million kilogrammes (3.27 mln pounds) of waste into “plastic lumber” that can be used for fences, house beams, signposts and more.

The company says it is reducing waste in the East African nation’s cluttered commercial capital, while creating jobs for young people and saving trees.

EcoAct Tanzania won the $10,000 Africa Finance and Investment Forum Entrepreneurship Award in Nairobi this week, which will help it grow, said founder and director Mwijage.

“It’s a pressing issue in our country – I feel like we have a big problem with plastic waste,” he told the Thomson Reuters Foundation, explaining why he started the company in late 2015.

Mwijage’s home of Dar es Salaam is the biggest city in Tanzania and one of the fastest-growing on the continent, with a population of over 4 million.

As in many African cities, that has led to large informal settlements and an accumulation of waste. Meanwhile, logging driven by the construction boom is ravaging Tanzania’s forests.

“I thought about the increasing activity in construction and tried to combine the two problems,” Mwijage said, meaning logging and waste.

He realised he could also create much-needed jobs by paying people to collect, clean and sort through neighbourhood trash.

EcoAct sought out parts of the city where there were piles of waste and offered to pay a small price for the usable plastic. In some cases, it pays children’s health insurance in exchange for collecting their families’ recyclables each week.

The company produces 70 to 80 plastic logs a day, but hopes to scale up to at least 400 once it can afford a bigger machine.

“Demand is high. The challenge is production capacity,” said Mwijage. The logs are cheaper than wood, he says, and more convenient because they don’t attract insects and cannot rot.

His hope for this year is to stop some of the deforestation happening around Mount Kilimanjaro by offering developers alternative supplies to wood. Later he hopes to expand to neighbouring Rwanda.

“As long as the number of people (in cities) is increasing, opportunities are increasing,” Mwijage said.—The Thomson Reuters Foundation