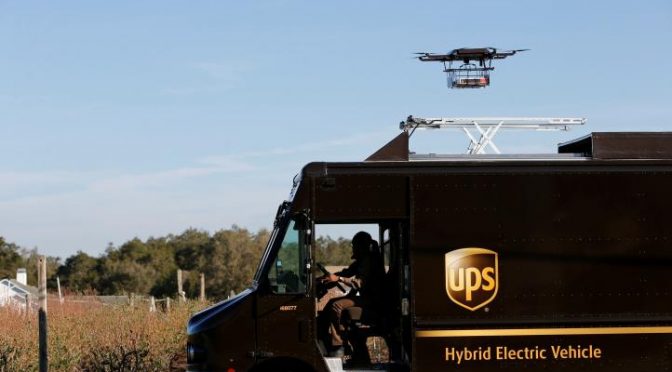 Package delivery company United Parcel Service Inc tested home delivery by drone in Lithia, Florida, on Monday, the first step in what the company hopes will be a move toward more automated delivery.

A drone launched from a UPS car roof, flew autonomously toward its destination, dropped a package and then returned to the vehicle, as the driver separately continued on a delivery route.

The Tampa-area test, which UPS said went as expected, came less than a month after UPS said it would push forward investment in automation and technology as the company, along with rival FedEx Corp, struggles with slimmer margins from e-commerce business.

“We see this as an exploration into this new technology,” said John Dodero, vice president of industrial engineering at UPS.

The company has conducted drone tests before, and is weighing other uses for the technology, such as in inventory control and helping inspect planes and vehicles within hangars and warehouses.

But UPS has no timeline for when drones might be put into wider use, Dodero said, partly because federal authorities are still developing regulations on how to use the technology.

UPS sees potential particularly in rural routes, such as in Monday’s test. Cities are dense enough that drivers typically have deliveries grouped relatively close together.

But rural routes are more spread out, and thus more expensive. If drones can handle some of those deliveries, the company can be more efficient along those areas and lower some costs, Dodero said.

He declined to say whether the company’s workforce could be trimmed by attrition as UPS expands drone delivery.

“We have no idea how all that will play out until we find out how to integrate them into the business,” he said. However, Dodero added UPS is not looking to use drones as a replacement for drivers.

“UPS is never looking to replace our UPS drivers,” he said, calling them “the face of our company.”—Reuters