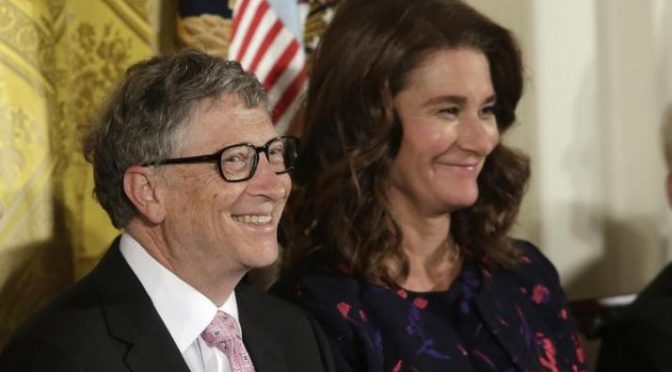 Some of the world’s most influential billionaire philanthropists plan to launch a powerful digital platform to harness the avalanche of data sent from satellites each day – and make it freely available for humanitarian and environmental causes.

Bill and Melinda Gates – who are also custodians of legendary investor Warren Buffet’s billions â€“ have joined forces with Pierre Omidyar, founder of eBay, to fund the ‘Radiant Earth’ project, a repository and archive of the world’s satellite, aerial and drone imagery.

The project, expected to cost “multi millions” of dollars, aims to find ways to combine and analyse Earth data and imagery and offer it free of charge in formats that do not require specific expertise to understand.

Anne Hale Miglarese, Radiant CEO, said the world is now awash in data but for non specialists, finding it and creating ways to use it practically can be both difficult and expensive.

“(Radiant) will help build the ‘who, what, where when or why’ for the planning and management of issues such as land tenure, global health, sustainable development, food security and disaster response,” she said.

The Gates Foundation invited more than 150 academics and data analysis specialists to Seattle last week for what was billed as a ‘Thought Leaders Summit’ on the project.

Amazon Web Services Global Open Data chief, Jed Sundwall, said Radiant would try to “give humans back their time to focus on research and analysis”.

“Open data is happy data: we have so much data that can tell us about our world but we can’t know it because it is too expensive to know it,” he said.

Industry experts said over the past five years the number of operational satellites has jumped 40 percent, and nearly 1,400 now orbit the Earth.

This number could more than double over the next five years as satellites become smaller, lighter and more affordable.

Entrepreneurs have increasingly begun to view the sky as a new market which can help feed the burgeoning global demand for more communications, satellite TV and broadband services.

However satellites are also collecting data from space about the Earth itself. Applications are far reaching – from tracking plant health through chlorophyll to gauging the impact of natural disasters and the surveillance of illegal logging.

Two weeks ago, India launched 104 satellites â€“ 101 of them for foreign companies and agencies – in a single mission as part of its strategic bid for a bigger share of the $300 billion global space industry.

Experts at the Seattle summit said the multiple launch, described as a world record by its space agency, was also significant because 88 were shoebox-sized Dove satellites launched by Planet, a San Francisco-based private satellite operator founded by former NASA scientists.

The constellation of small satellites will, once settled into orbit in six months’ time, will photograph the entire Earth every day.

“Satellite imagery might be one of the most powerful and unbiased tools to tell people what is going on with the planet” Albert Lin, Research Scientist at the University of California, San Diego, told the summit.

The key, he said, lay in finding ways to translate enormous amounts of information into something that can be understood by everyone.

This means finding ways of sorting and interlinking the trillions of bits of data sent to Earth and re-construct them into readable, digital and sometimes 3D models.

In some cases, data can be analysed with the help of communities of “citizen scientists sitting alone at their computers all over the world”.

“This is a wake-up call that satellite imagery is not just about questions and insights but also about engaging the entire planet in observing the planet, together,” he said.

Some of these techniques were used to map the New Zealand city of Christchurch after the 2011 earthquake and in the search for the Malaysian Airlines jet that went missing in 2014, he said.

Lin said his laboratory, the California Institute for Telecommunications and Information Technology, can explore the world without disturbing a sod of soil.

He led a team that tried to find Genghis Khan’s tomb in one of the most remote parts of Mongolia, a quest that has fascinated historians and scientists for centuries.

Mongolians believe the tomb to be sacred and any disturbance of its site a portent of disaster.

Data analysts from Australia to Norway scoured satellite and geo-spatial data from the most remote parts of the Mongolian mountains. They helped to spot ancient structures seen only from space that helped to guide the team on the ground on horseback to pinpoint the most likely sites.

The team also hopes Radiant will encourage the creation of more open source technologies and innovation that can help “solve societies’ most pressing issues.”

“Radiant is about using Earth imagery for positive global impact,” she said.