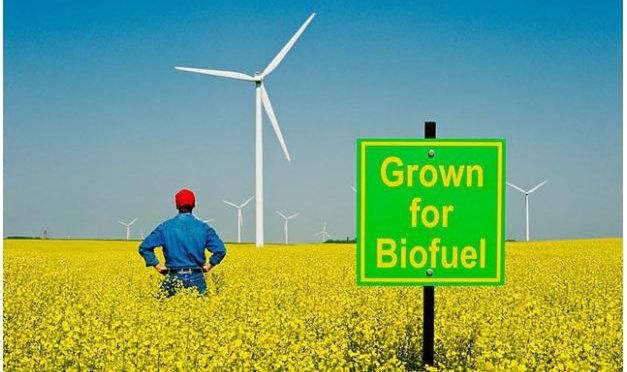 Growing use of electric vehicles around the world is helping lower climate changing emissions, but some means of transport will be hard to electrify, particularly air travel and shipping, energy experts say.

To “decarbonise” those, the world will need to rapidly develop and bring to market biofuels – while trying to ensure they don’t crowd out food production, say the authors of a report by the International Renewable Energy Agency (IRENA).

With “the right selection of the right raw material” about 12 percent of transport fuel could come from renewable sources by 2030, said Francisco Boshell, a technology analyst at IRENA and one of the report’s authors.

The “right” materials might include forest waste such as sawdust, fast-growing trees, agricultural residue, algae and “high-energy” crops, such as grasses grown on degraded parcels of land around the world, Boshell said.

“Biofuels have a vital role to play in the global transition to sustainable, renewable energy and, together with electric vehicles and the increase of renewables in the power mix, they can help us move away from petroleum use in passenger transport,” the report noted.

Today biofuels are relatively expensive compared to fossil fuels such as oil and gas, but investing in innovation in their production and use could potentially reduce their costs by a third over the next three decades, the report said.

To overcome cost problems countries need to come up with innovative technologies, craft favourable policies and develop business models to incentivise production and drive down prices, it said.

Care however needs to be taken to ensure that biofuel expansion doesn’t result in farmland being turned from food production to biofuel production, Boshell said.

A THIRD OF WORLD ENERGY

Transport currently accounts for about a third the world’s energy use, half its oil consumption, and a fifth of its greenhouse gas emissions, the IRENA report said. Those numbers could rise with the number of vehicles on the roads estimated to grow from about 1.2 billion currently to as many as 2 billion by 2030, it said.

Aviation alone contributes nearly 3 percent of global carbon emissions, a share that is likely to grow in the future as economies develop, the report said.

Production plants at planning stage or under construction could potentially add another 2 billion litres per year of ethanol, methanol, mixed alcohol and jet fuels, the report’s authors noted.

“The pace of production and investment will have to increase exponentially, and projects develop further afield, if advanced liquid biofuels are to fulfil their practical and economic potential for displacing fossil fuels,” they said.

They attribute slow growth in investment in biofuels partly to low oil prices in recent years.

European, North American and Latin American countries lead in alternative fuels production, the report said, noting that there is little production in African and Asian countries, except for Japan, China and South Korea.

According to Rachel Kyte, chief executive of Sustainable Energy for All, an organisation working to achieve 100 percent global access to sustainable energy by 2030, the best way to cut transport emissions is to focus on electrifying transport as much as possible.

But shipping, aviation, mass transport systems and long haul transport – all significant contributors to global emissions – may need to rely on biofuels in order to meet carbon-cutting targets, she said.

“The long-term future to decarbonising the transport sector lies in use of biofuels that have twice the efficiency of ordinary fuels,” she told the Thomson Reuters Foundation.

Other ways to cut transport emissions could come from designing cities so that public transport is more efficient and by encouraging non-motorised forms of transport, Kyte said.

One worry is that few new technologies are in the pipeline to reduce emissions from aviation, even as air travel expands as economies grow around the world, said Deger Saygin, a programme officer at IRENA’s Innovation and Technology Centre.

Projections also suggest that a third of the growth in demand for oil over the next 10 to 15 years will come from the trucking industry in Asia, he said.— Thomson Reuters Foundation