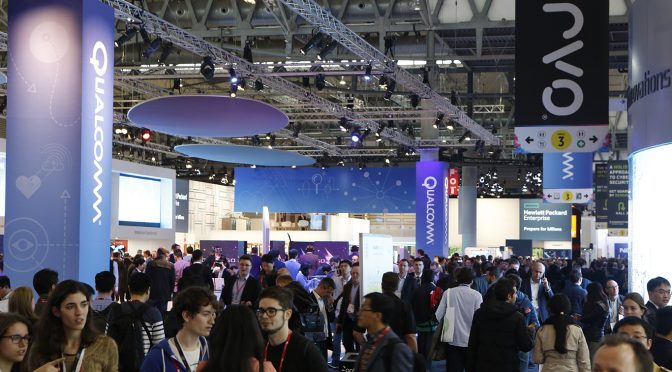 The phone industry’s largest annual trade fair, the Mobile World Congress which wrapped up in Barcelona on Thursday, was dominated by fast-charging phone batteries, virtual reality and connected objects, from toothbrushes to cars.

Several phonemakers unveiled new smartphones with batteries that can last longer and be charger faster.

Blackberry’s new devices, which bring back the brand’s iconic physical keyboard, have the brand’s biggest-ever batteries. They also feature a “boost mode” that allow you to get a a 50 percent charge in roughly 36 minutes.

Drones and robots were everywhere at this year’s trade show. At Korea Telecom’s stand, two robotic arms played the drums, varying the songs throughout the day. Japanese firm Softbank drew crowds with its human-like robot Pepper which can be employed in shops to greet customers and demonstrate products, while Barcelona-based Pal Robotics displayed two humanoid robot models.

The fair set up a special “drone zone” for the first time to demonstrate their use in the delivery of goods to remote areas or aid to farmers by surveying crop growth.

Virtual reality (VR) headsets were front and centre, in a sign of the importance placed on the technology by the sector.

Samsung unveiled several new innovations including a 360-degree virtual travel app designed to allow people to reminisce about past experiences.

Lithuanian mobile app developers TeleSoftas showcased an app which allows business meetings to be held in virtual reality with avatars representing people in different parts of the globe.

Following on the heels of the success of Amazon.com’s Echo, a hands-free speaker with AI-powered virtual assistant Alexa, several firms showcased their own version of the technology.

Sony unveiled a new version of its Xperia Ear earphones which includes a virtual assistant called the Sony Agent.

Both LG and Motorola presented new flagship smartphones that integrated a virtual assistant while Samsung announced that its new high-end phone which will be presented in New York at the end of the month will also have one.

Research firm Garner predicts that by 2019, 20 percent of all our interactions with a smartphone will be carried out via such assistants.

Companies rolled out products based on a future centred on the “internet of things”, a network of devices, vehicles and building sensors that collect and exchange data.

Several driverless cars were on display while a small French firm called Kolibree showcased a smart toothbrush that measures how well you brush your teeth and sends the statistics to your smartphone.

An Indian start-up, Lechal, displayed shoes with smart soles which vibrate to guide users to their destination. They work by connecting to the GPS tracker of a user’s smartphone.—AFP