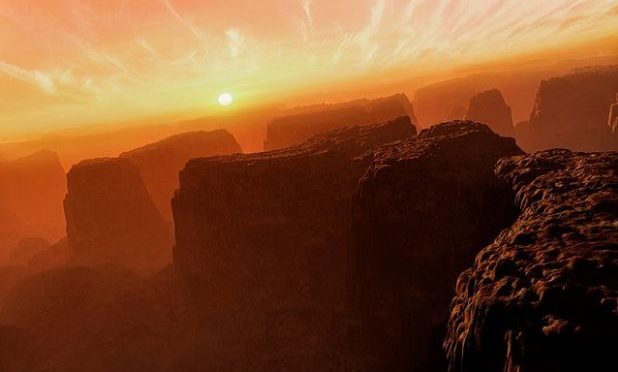 Scientists at NASA have proposed that launching a giant magnetic shield into space to protect Mars from solar winds could give the Red Planet its atmosphere back and make it habitable for humans.

Mars now appears to be a cold desert world and it has no global magnetic field. The cold temperatures and thin atmosphere on the red Planet do not allow liquid water to exist at the surface for long. But it might not have been always so.

Scientists believe that the Red Planet once had a thick atmosphere necessary to maintain liquid water, and a warmer, potentially habitable climate. It is the collapse of the protective magnetic field billions of years ago that eventually made Mars what it is today—cold and arid.

In a presentation at the Planetary Science Vision 2050 Workshop in Washington, DC last week, NASA scientists proposed that launching a giant magnetic shield into space between Mars and the Sun could help the Red Planet restore its atmosphere and make it suitable for humans to colonise in the future.

The US space agency thinks a powerful-enough magnetic shield launched into space could serve as a replacement for Mars’s own lost magnetosphere, ScienceAlert reported on Monday.

Launching an “artificial magnetosphere” into space between Mars and the Sun could hypothetically shield the Red Planet in the extended magnetotail that trails behind the protective field, NASA’s Planetary Science Division director Jim Green was quoted as saying.

“This situation then eliminates many of the solar wind erosion processes that occur with the planet’s ionosphere and upper atmosphere allowing the Martian atmosphere to grow in pressure and temperature over time,” the researchers explained in an accompanying paper.

The researchers believe that the magnetic shield could help Mars regain some of its lost Earth-like habitability within the space of a couple of generations.