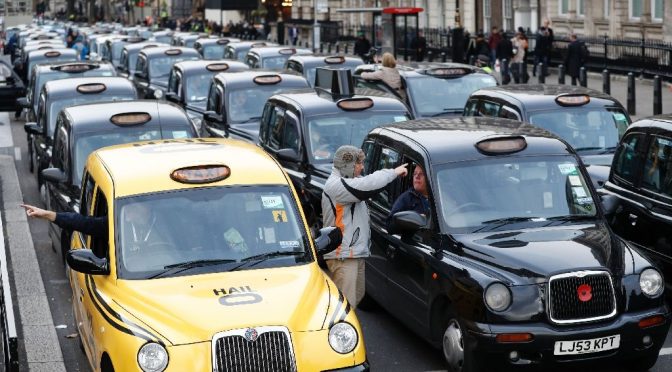 Yellow taxi cabs have significantly fewer accidents than cabs of a darker hue, according to research that scientists say could end up saving lives and money.

A study published Monday in the journal PNAS showed canary yellow cabs in Singapore were nine percent less likely to get into fender-benders or serious smash-ups than taxis that were deep blue.

“Yellow taxis are safer to travel in because yellow is more visible than blue,” lead author Teck-Hua Ho, a professor at the National University of Singapore, told AFP.

Accident rates diverged even more at night, probably because street lighting accentuates the contrast, he said.

The findings “should play a major role in determining the colours used for public transportation vehicles,” the study concluded.

While this might seem like common sense, up to now there has been scant scientific evidence that dark-coloured cars are more dangerous.

To test their hunch that colour matters when it comes to safety, Ho found a real-world laboratory in his own backyard.

The fleet of Singapore’s largest cab company, it turned out, was divided between light- and dark-toned vehicles.

The researchers compared accident records covering a 36-month period for more than 4,000 yellow and 14,500 blue cars belonging to the company.

To make sure there was no discrepancy in driver skills, they also analysed background data and work histories of 3,341 randomly selected professional cabbies.

“Some drivers also had experience driving taxis of both colours, and we showed that they had higher accident rates when they drove blue taxis,” Ho told AFP.

The risk, they found, is especially dangerous for the drivers.

Over a typical, 40-year career, a cabbie in a dark-toned vehicle will, on average, get into three additional accidents, 34 instead of 31.

Any of those extra smash-ups, of course, might be fatal — for the driver or the passengers.

The Singapore taxi company’s 16,700 cars could avoid 900 accidents per year if the entire fleet were painting yellow, the researchers calculated.

Assuming an average repair cost of $US 700 (670 euros) per car and a down time of six days, switching colours would also generate annual savings of $US 1.4 million (1.3 million euros).

The Yellow Cab Company of Chicago set what was to became a global trend in 1907 after commissioning a study on what colour would be most visible for people trying to hail a cab.

During the first two decades of the 20th century, almost all cars plying city streets were black.

Yellow cabs spread across the United States, most famously in New York City, where they remain an icon and an institution to this day.

As often happens in science, Ho and his colleagues did not set out to study the link between colour and car crashes.

“We were engaged in a general study on the accident rate of taxi drivers,” ho explained by email.—AFP