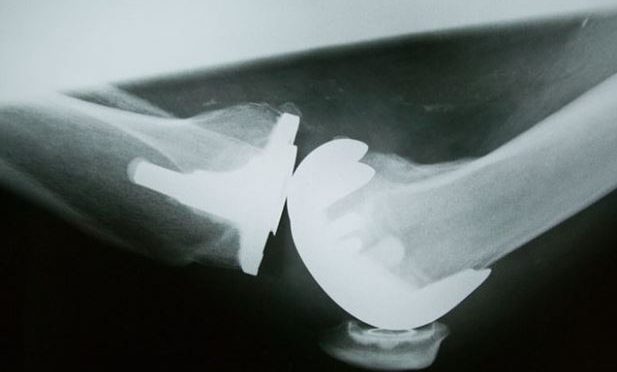 In the world’s second such case, the All India Institute of Medical Sciences (AIIMS) here has given a new lease of life to a 20-year-old man by performing a rare quadruple joint replacement surgery that enabled him to sit and walk after more than a decade.
The first such surgery—which was considered impossible until a few years ago due to the high risk involved—was also performed at AIIMS in 2013.

It all started after Guddu—resident of Bihar—developed pain in his right foot which, due to ignorance and lack of proper medical facility, spread to the ankle, shin and knee.

With improper diagnosis at local health institutions, the problem initially remained confined to the right leg but later spread to the other leg as well. As time progressed, Guddu’s knee joints bent at 90 degrees, making it impossible for him to walk.

Anxious to get their son cured, Guddu’s parents continued his treatment at local hospitals in the rural areas of Bihar, which not only cost them more than Rs five lakh but a further delay that led to the pain spreading to both his hip joints, which left him unable to even sit.

Medical science categorises such cases under Juvenile Idiopathic Arthritis (JIA) — inflammation of the joints that starts before the age of 16. Some types of JIA can cause serious growth problems and eye inflammation.

After suffering for over 10 years and facing difficulty in getting proper diagnosis in Bihar, the patient was moved to the Delhi-based AIIMS in May 2016, where the doctors diagnosed the problem to be JIA. However, though the malady was now correctly diagnosed, Guddu’s joints were completely deformed by then.

The patient was admitted under renowned AIIMS orthopaedic surgeon Rajesh Malhotra, who considered the best alternatives to get Guddu’s all four joints corrected and thus enable him to walk once again.

Malhotra said that in Guddu’s case, all four joints (hips and knee) were deformed and until all four were changed, the patient could not stand or walk.

Though in such surgeries, doctors across the world prefer replacement of joints one after another, Malhotra and his team decided to perform all four joint replacements together.

This was done keeping similar quadruple joint replacement case in mind by Malhotra and team in 2013, which was the world’s first.

“Nowhere in the world other than AIIMS has a four-joint replacement surgery been performed together. In our case, we have done the surgery in one single go and in fact within one year the patient will start running,” Malhotra told IANS, adding that doctors elsewhere take a year at least to complete the same procedure as the replacement of joints is done one after another.

Anjan Trikha, Professor of Anesthesia and member of Malhotra’s team, said: “In such cases until all four joint replacements are done together… chances for the deformed joints to go back in the same position are very high.”

However, doctors also say that such surgeries also depend on the will of the patient.

“Such surgeries should not be attempted at institutions lacking infrastructure,” said Trikha.

Guddu, who is undergoing physiotherapy after undergoing the surgery late last year, is now able to stand and walk without any support.

Doctors said that within one year, Guddu’s legs will also gain muscles, making them look normal.