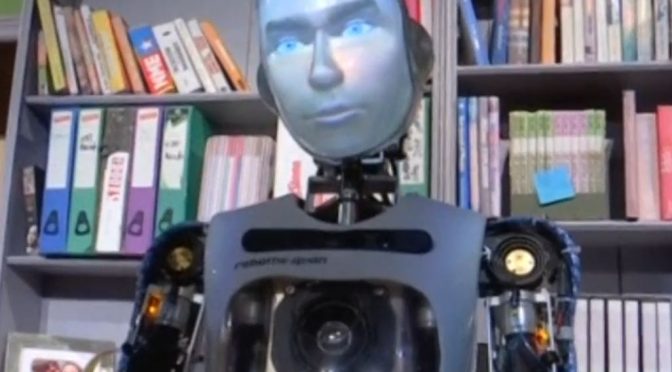 When Judy Norman walks on stage for the play “Spillikin”, she performs beside a somewhat different cast member – a humanoid robot.

Featuring a “robothespian”, the play brings love and technology together for a story about a robot maker who builds a robot to keep his wife company after he dies.

Cornwall-based Pipeline Theatre, which has worked with robotics company Engineered Arts for the project, is touring across England.

“So the robot will always say the same thing and move in the same way depending on what cue is being triggered at what particular time.”

The robot is connected to the theatre’s control room, where a laptop transmits cues for its performance.

“(There is) a big pressure on the actor…to always have the right lines, always stand in the right place so that the robot is looking at the right direction at that particular moment,” Welch said.

On stage, Norman talks to the robot and even kisses it. In return, the robot replies, displays facial expressions and moves its hands.

“Working with a robot is something of course I have never done before so it’s a completely different experience,” she said. “When he looks at me, this going to sound weird, but he is very affectionate and I like him, I really like him.”

“Spillikin” runs in London until March 19 and continues its tour until April.—Reuters