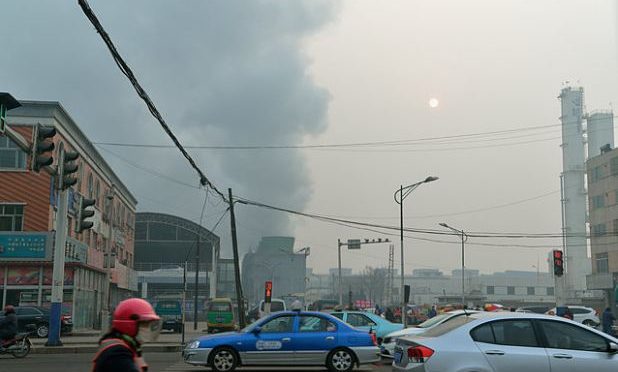 Toxic particles in the air cause nearly a million premature deaths in the country every year, according to earlier research.

In Beijing and other major northern cities, the number of days each year with weather tailor-made for extreme smog rose from 45 to 50 in the period 1982-2015 compared to the previous three decades, a ten-percent jump, the study found.

The trend is set to worsen if warming continues unabated.

Persistent episodes of health-wrecking haze would become another 50 percent more frequent — and last nearly twice as long — during the second half of this century, the scientists found.

The burning of coal, along with vehicle emissions and dust, are the main sources of these ultra-fine specks, which can cause severe respiratory problems and increase the risk of heart disease.

Small enough to enter human cells, they can also affect the immune and nervous systems.

In January this year, a thick blanket of sun-dimming haze settled over the Beijing-Tianjin basin — home to more than 100 million people — for eight consecutive days, causing tens of thousands to flee cities and vent their anger on social networks such as Weibo and WeChat.

For several days running, the density of particles 2.5 micrometres or less was higher than 500 micrograms per cubic metre, more than three times the danger threshold set by the World Health Organization.

“I would rank air pollution as the number one or number two concern of ordinary people in northern cities in China,” co-author Hong Liao, a researcher at Nanjing University’s School of Environmental Science and Engineering, told AFP.

A report by China’s environment ministry last year showed that 265 of the country’s 338 biggest cities failed to meet new health standards for small-particle pollution in 2015.

The perfect storm of geographic and weather conditions that favour lung-searing smog include sharp temperature differences between the lower and upper atmosphere, faint winds, and certain patterns of atmospheric flow.

The researchers, led by Wenju Cai of the Qingdao National Laboratory for Marine Science and Technology, combined these elements to create a “haze weather index”, which they matched against 60 years of weather records.

Averaging across 15 climate models, they also calculated a sharp increase in the number of smog-inducing days from 2050 to 2100.

After a particularly bad episode in January 2013 — which sparked protests and caused $3.4 billion (3.2 billion euros) in health and production losses — the Chinese government took sharp measures to reduce air pollution, but with limited success.

“In spite of stringent emission controls, severe haze days in Beijing have continued to increase, as clearly seen over the past three winters,” Renhe Zhang, a researcher at Fudan University, said in a commentary also published in Nature Climate Change.

“A global effort to slow down global warming is also urgently needed to decrease the risk of heavy air pollution in Beijing,” he added.

The problem is not confined to China. In 2013, nearly a million untimely deaths in India were also attributed to fouled air, not including so-called household air pollution, mainly from primitive cook stoves.