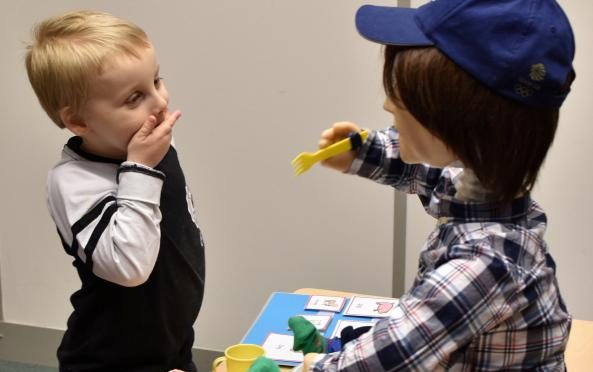 “This is nice, it tickles me,” Kaspar the social robot tells four-year-old Finn as they play together at an autism school north of London.

Kaspar, developed by the University of Hertfordshire, also sings song, imitates eating, plays the tambourine and combs his hair during their sessions aimed at helping Finn with his social interaction and communication.

If Finn gets too rough, the similarly sized Kaspar cries: “Ouch, that hurt me.” A therapist is on hand to encourage the child to rectify his behaviour by tickling the robot’s feet.

Finn is one of around 170 autistic children that Kaspar has helped in a handful of schools and hospitals over the last 10 years.

But with approximately 700,000 people in Britain on the autism spectrum, according to the National Autistic Society who will mark World Autism Day on Sunday, the university want Kaspar to help more people.

“Our vision is that every child in a school or a home or in a hospital could get a Kaspar if they wanted to,” Kerstin Dautenhahn, professor of artificial intelligence at the University of Hertfordshire, told Reuters.

Achieving that goal will largely depend on the results of a two-year clinical trial with the Hertfordshire Community NHS Trust, which, if successful, could see Kaspar working in hospitals nationwide.

TRACKS, an independent charity and specialist early years centre for children with autism in Stevenage, have seen positive results from working with Kaspar, who sports a blue cap and plaid shirt for play sessions.

“We were trying to teach a little boy how to eat with his peers. He usually struggled with it because of his anxiety issues,” said deputy principal Alice Lynch.

“We started doing it with Kaspar and he really, really enjoyed feeding Kaspar, making him eat when he was hungry, things like that. Now he’s started to integrate into the classroom and eat alongside his peers. So things like that are just a massive progression.”

Many children with autism find it hard to decipher basic human communication and emotion so Kaspar’s designers avoided making him too lifelike and instead opted for simplified, easy to process features.

Autism support groups have been impressed.

“Many autistic people are drawn to technology, particularly the predictability it provides, which means it can be a very useful means of engaging children, and adults too,” Carol Povey, director of the National Autistic Society’s Centre for Autism, told Reuters.

“This robot is one of a number of emerging technologies which have the potential to make a huge difference to people on the autism spectrum.”—Reuters