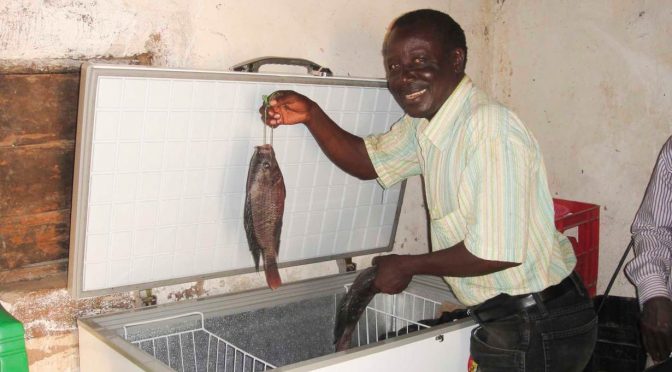 Mary Atieno was often forced to sell her tilapia well below the market rate because she had to get rid of the fish quickly in the searing heat bearing down on her village on the shore of Lake Victoria.

Lack of electricity meant Atieno was at the mercy of commercial fish buyers and made little or no profit because she could not refrigerate her catch of tilapia and Nile perch.

Poor rural communities, like Muhuru Bay in western Kenya where Atieno lives, are often far from markets where they can sell their produce and lack basic infrastructure and electricity despite rapid electrification elsewhere in the country.

With a grant by British charity Comic Relief, fishing cooperatives in the area received solar freezers to chill their catch rather than having to resort to preserving it with smoke, a practice that makes the fish more chewy and harder to sell.

“With the deep freezers, we can store fish for up to four days while we source for a profitable market,” Atieno, a 43-year-old married mother of four and secretary to Ngore Mtakatifu Women Group, told the Thomson Reuters Foundation.

With its year-round sunshine, solar power is ideally suited to Kenya where electricity access surged to around 60 percent in 2016 from 27 percent three years before, according to government data, due to a drive to achieve universal access by 2020.

Remote areas such as the lakeshore settlements on Lake Victoria lag behind though, experts said.

“For a long time, some of these settlements along the lakeshore have been neglected,” said Herick Othieno, a solar energy expert at Maseno University in Kenya.

“It’s only recently that power started getting there,” said Othieno, who led the creation of Renewable Energy Solutions for the Lake Victoria Environment(RESOLVE) with Renewable World and its local partners.

Soil in the area is poor and hard to cultivate, leaving commercial fishing in Africa’s largest lake as one of the few alternatives to make a living.

Increasing access to solar power is helping to lift local people out of poverty by improving their income and sparking business opportunities beyond fishing, experts said.

The Muhuru Bay community solar hub is one of six that RESOLVE established on the lakeshore, with their power capacity ranging from 1.5 to 2.0 kilowatt (KW) which can be expanded and support up to 50 connections.

Users pay a connection fee and are charged by the hour for using the technology as part of a pay-as-you go system for off-grid electricity that has become popular across Kenya and many other countries in sub-Saharan Africa.

Thirty households are connected to the system in the Muhuru Bay area, managed by community organisation Ngore Renewable Energy and Auxiliary Project (REAP) and benefitting 1,400 people, including small businesses.

“We also have some running barber shops and phone charging businesses with the solar power,” said Lucas Okoth, REAP’s chairman.

The micro-grids installed by Renewable World are simple steel frame structures that hold the solar panels and a control box housing batteries, a charger and energy distribution systems.

Each grid has a smart meter connected to mobile phone-based money transfer service M-Pesa through which customers make their payments before they are transferred electronically to the solar hub’s bank account.

The fishermen have also been able to cut costs by using solar rechargeable lamps on their boats during night time fishing.

They now spend 200 Kenyan shillings ($1.94) a day, a quarter of what it used to cost them to fuel their fishing lamps with kerosene, said REAP’s Okoth.

Villager Lovis Odhiambo said his home is healthier since he has become a customer as he no longer has to use sooty and smokey kerosene lamps and his children are more comfortable studying at night thanks to solar lighting.

It is also cheaper – he used to spend 50 shillings a day on paraffin compared to the 200 shillings he now spends every month on solar power.

“The table cloths were always dirty with soot and the smoke was irritating to the eyes. Sometimes it felt like we were short of breath and the house would smell of the paraffin,” said Odhiambo.

A SOLAR “GRAVEYARD” NO MORE

The amount of solar energy captured into the national grid is currently negligible despite the government’s call for investments in renewable energy sources.

Kenya’s Energy Regulatory Commission (ERC) identified high initial capital costs and low awareness of the potential opportunities and economic benefits offered by solar technologies as some of the reasons.

Some projects also fell into disrepair despite receiving large subsidies.

“In the past they used to say Africa was a ‘graveyard of failed solar projects’ because of all the 100 percent subsidised installations which broke down and never got fixed because no mechanism was put in place for operation and maintenance,” said Charlie Miller, director for national programmes at Power for All.