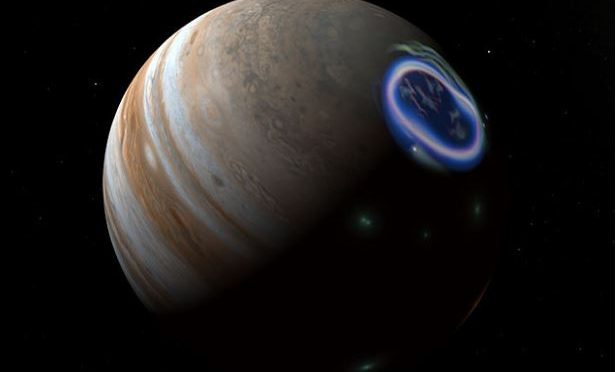 Jupiter is best known for the Great Red Spot, a long-lived storm roughly the diameter of Earth. But astronomers have now discovered another such Great Spot, dubbed ‘Great Cold Spot’, created by the powerful energies exerted by the great planet’s polar aurorae.

The cool dark patch stretches up to 24,000 km across and 12,000 km wide, and it is in the gas giant’s thin high-altitude thermosphere which is much cooler than the surrounding atmosphere, said a study in the Geophysical Research Letters.

“This is the first time any weather feature in Jupiter’s upper atmosphere has been observed away from the planet’s bright aurorae,” said lead author of the study Tom Stallard, Associate Professor in Planetary Astronomy at University of Leicester in Britain.

The phenomenon, only recently observed, may have existed for thousands of years.

“The Great Cold Spot is much more volatile than the slowly changing Great Red Spot, changing dramatically in shape and size over only a few days and weeks, but it has re-appeared for as long as we have data to search for it, for over 15 years,” Stallard said.

“That suggests that it continually reforms itself, and as a result it might be as old as the aurorae that form it – perhaps many thousands of years old,” Stallard added.

The researchers then compared the data with thousands of images from NASA’s InfraRed Telescope Facility in Hawaii.

The analysis confirmed the presence of the Great Cold Spot.