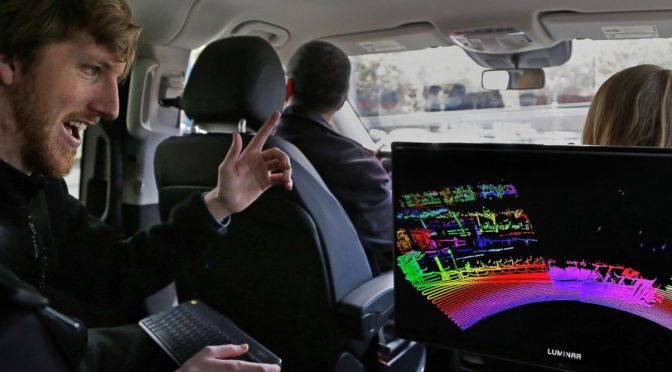 Austin Russell, now 22, was barely old enough to drive when he set out to create a safer navigation system for robot-controlled cars. His ambitions are about to be tested.

Five years ago, Russell co-founded Luminar Technologies, a Silicon Valley startup trying to steer the rapidly expanding self-driving car industry in a new direction. Luminar kept its work closely guarded until Thursday, when the startup revealed the first details about a product Russell is touting as a far more powerful form of “lidar,” a key sensing technology used in autonomous vehicles designed by Google, Uber and major automakers.

Lidar systems work by bouncing lasers off nearby objects and measuring the reflections to build up a detailed 3-D picture of the surrounding environment. The technology is similar to radar, which uses radio waves instead of lasers.

Russell says Luminar’s version, consisting of its own patented hardware and software, will provide 50 times more resolution and 10 times the range of current lidar systems. Those improvements, he said, will enable self-driving cars to be sold on the mass market more quickly.

During an interview in an empty warehouse on a San Francisco pier where Luminar has been testing its lidar, Russell wasn’t shy about making big claims for its technology. “When you see your vehicle is powered by Luminar, you will know you will be safer,” he said. “We need to get to the point where humans don’t have to constantly baby-sit and take control” of autonomous cars.

If Luminar’s lidar lives up to its promise, some of the world’s biggest technology and auto companies may have been upstaged by a precocious entrepreneur who says he memorized all the periodic table of the elements when he was 2 years old. By the time he turned 11, Russell says he was tinkering with supercomputers.

Like another technology prodigy — Facebook co-founder Mark Zuckerberg — Russell won the early support of PayPal co-founder Peter Thiel, who became a billionaire after investing $500,000 in Facebook during the company’s infancy.

One of Luminar’s early investors is a venture capital firm backed by Thiel and eBay founder Pierre Omidyar. Russell also dropped out of Stanford University after just three months when he won a Thiel fellowship, which pays students $100,000 to work on promising ideas instead of pursuing a degree.

Also like Zuckerberg, Russell is CEO of his company. Most of Luminar’s roughly 150 employees are older than him, including his former mentor in photonics, 45-year-old Jason Eichenholz, now the company’s chief technology officer. Russell’s father, a former commercial real estate specialist, is the company’s chief financial officer.

Now Russell will have to prove he has indeed invented something revolutionary.

While lidar is a key component in self-driving clears, some believe Luminar may be working on the wrong problem. The big issue for lidar systems these days is cost, not safety, said Alex Lidow, CEO of Efficient Power Conversion, which supplies chips for lidar. The systems currently cost thousands of dollars apiece.

“You don’t need the resolution that would allow a car to stop before a bug hits its windshield,” Lidow said. “The question comes down to, what is the exact right amount of information for the car to make exactly the right decision all the time?”

Luminar plans to being manufacturing 10,000 lidar units at a 50,000-square-foot plant in Orlando, Florida, this year. Russell won’t disclose what they’ll cost. About 100 of the lidar systems will be tested by four makers of autonomous cars that Luminar isn’t identifying. The partners include technology companies and automakers, Russell said.

Luminar will be competing against other lidar suppliers such as Velodyne and Quanergy Systems, which have each raised $150 million so far. Velodyne’s backers include Ford Motor, which invested $75 million last summer .

By comparison, Luminar has raised $36 million, some of which has been used to set up its headquarters on a former Silicon Valley ranch that used to be home for a collection of vintage military tanks.

Waymo, a company spun off from Google’s early work on self-driving cars, also looms as an imposing competitor. It hopes to sell its technology, which includes a lidar system, to automakers.

One sign of lidar’s importance: Waymo has accused Uber of stealing its technology in a high-profile legal battle. Uber has denied the allegations , contending it is designing its own superior lidar system.

Waymo’s lidar has a solid track record so far. Its self-driving cars have logged more than 2 million miles in autonomous mode on city streets without being involved in a major traffic accident. Most of the roughly three dozen accidents that Google had reported through last year were fender benders.

Russell isn’t impressed. “It’s very easy to build an autonomous vehicle that is safe 99 percent of the time,” he said. “It’s that other 1 percent that’s the tricky part.”—AP