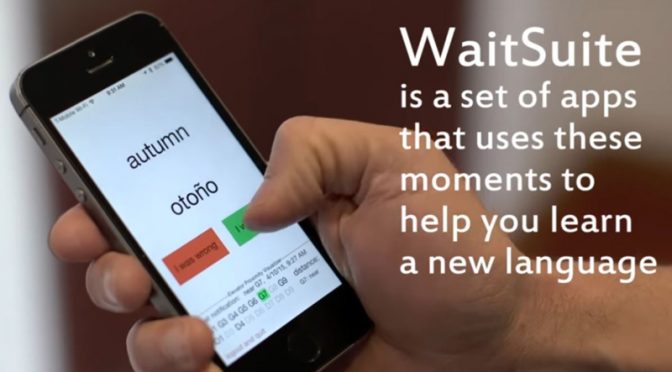 Are you tired of a slow Wi-Fi connection hampering your social media life? Now you can utilise the idle time in enhancing your vocabulary with a new app.

“WaitSuite is embedded directly into your existing tasks, so that you can easily learn without leaving what you were already doing,” said Carrie Cai, a PhD student who leads the project in a statement.

“With stand-alone apps, it can be inconvenient to have to separately open them up to do a learning task,” Cai added.

Among WaitSuite’s apps include “WiFiLearner” which gives users a learning prompt when it detects that their computer is seeking a WiFi connection.

Meanwhile, “ElevatorLearner” automatically detects when a person is near an elevator by sensing Bluetooth iBeacons and then sends users a vocabulary word to translate.

“WaitSuite” covers five common daily tasks: waiting for WiFi to connect, emails to push through, instant messages to be received, an elevator to come or content on your phone to load.

The team hopes to test other formats for micro-learning, like audio for on-the-go users. They even picture having the app remind users to practice mindfulness to avoid reaching for our phones in moments of impatience, boredom or frustration.

A paper on the system is expected to be presented at ACM’s CHI Conference on Human Factors in Computing Systems in Colorado in May.—IANS