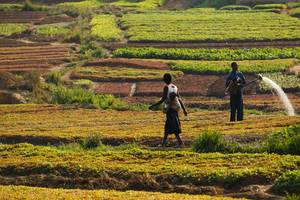 “FAO’s teams have designed WaPOR to cover Africa and the Near East, with a focus on key countries that are or are projected soon to face physical or infrastructural water scarcity,” said the spokesman.

Worldwide water utilisation — the majority of which is used by agriculture — has outpaced the rate of population growth for most of the last century and some regions are close to breaching viable limits, he added.

WaPOR was presented this week during a high-level partners meeting for FAO’s Coping with water scarcity in agriculture: a global framework for action in a changing climate.

It allows for fine-grained analysis of water utilised through farming systems, generating empirical evidence about how it can be most productively used.

“Water use continues to surge at the same time that climate change — with increasing droughts and extreme weather — is altering and reducing water availability for agriculture,” says Maria Helena Semedo, FAO’s deputy director-general for climate change and natural resources.

“That puts a premium on making every drop count, underscoring the importance of meeting growing food production needs from efficiency gains.”

WaPOR sifts through satellite data and uses Google Earth computing power to produce maps that show how much biomass and yield is produced per cubic meter of water consumed.

The maps can be rendered at resolutions of as little as 30 to 250 metres, and updated every one to ten days.

FAO’s team of information technology and land and water officers has designed WaPOR — through a 10 million USD project funded by the government of the Netherlands — to cover Africa and the Near East, with a focus on key countries that are or are projected soon to face physical or infrastructural water scarcity.

Even more detailed data will come online in October, starting with pilot areas in Lebanon, Ethiopia and Mali.—IANS