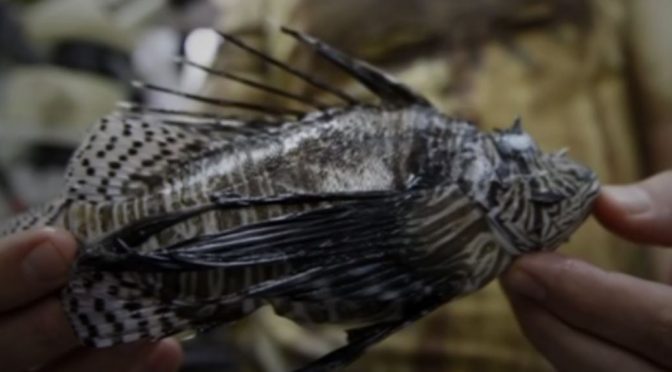 As it turns out, some of the best cooks in the world think lionfish, a venomous predatory fish which is breeding out of control and destroying marine ecosystems in the Atlantic Ocean and the Caribbean Sea, is delicious.

The chefs gathered in Bermuda on Wednesday for a competition dubbed the “Lionfish Throwdown” where they challenged one another to come up with the tastiest solution to the problem of invasive lionfish.

“Every chef likes to be sustainable in what they are doing,” said Chris Kenny, head chef on Necker Island in the British Virgin Islands.

“Lionfish are going to keep spreading, and it’s not going to stop unless people step in and do something about it.”

Native to the Pacific Ocean, lionfish have no natural predators in Atlantic waters and females can spawn nearly 2 million eggs per year.

“On reefs where sport divers are actively diving with harpoons to try and control the lionfish, they actually do a pretty good job, said Colin Angle, executive chairman of iRobot Corp, a consumer robot company that builds and designs robots.

â€œBut that’s a very small percentage of the ocean … We needed something far more flexible that could go far deeper, longer.”

Angle, who recently founded Robots In Service of the Environment (RSE), a nonprofit organization set up to protect the oceans, built a machine named the Guardian specifically designed to hunt and capture lionfish.

“We basically drive the Guardian up to the fish, position it between two electrodes, apply a current and stun the fish, knocking the fish out, said Angle.

The device is still in its early stages of development. Its first prototype, which was unveiled earlier this week, can capture and hold about 10 fish before resurfacing.

Angle said he intends to make the robots affordable enough to entice fisherman to buy the machines in hopes that they will hunt the invasive species in greater numbers.

He also wants to turn lionfish hunting into an online sport.

“With advances in wireless technology, we can actually have an app where people pay to go hunt lionfish and capture the fish by remotely operating the robot, he said, adding that, if robots can catch lionfish, a new market in which chefs can turn an environmental hazard into gourmet cuisine might emerge.—Reuters