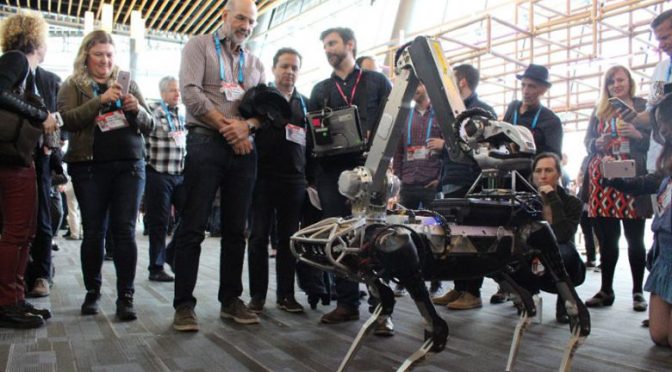 Intelligent machines of the future will help restore memory, mind your children, fetch your coffee and even care for aging parents.

It will all be part of a brave new world of the not-so-distant future, in which innovative smart machines, rather than being the undoing of people — as some technophobes have long feared — actually enhance humans.

Many expert say technology will allow people to take on tasks they might only have dreamed of in the past.

“Super-intelligence should give us super-human abilities,” said Tom Gruber, head of the team responsible for Apple’s Siri digital assistant, during an on-stage talk at the prestigious TED Conference.

“As machines get smarter, so do we,” Gruber said.

“Artificial intelligence can enable partnerships where each human on the team is doing what they do best,” he told the popular technology conference.

Gruber, a co-creator of Siri and artificial intelligence research at Apple, told of being drawn to the field three decades ago by the potential for technology to meet people’s needs.

“I am happy to see that the idea of an intelligent personal assistant is mainstream,” he said.

Now he has taken his innovative approach to smart machines, and is turning the thinking about the technology on its head.

Amazon appears to have impacted the sector the most with its connected speakers using Alexa. The service allows users a wide range of voice interactions for music, news, purchases and connects with smart home devices.

“Human memory is famously flawed — like, where did the 1960s go and can I go there too?” Gruber quipped.

He spoke of a future in which artificial intelligence remembers everyone met during a lifetime and details of everything someone read, heard, said or did.

“From the tiniest clue it could help you retrieve anything you’ve seen or heard before,” he said.

Such memories would need to be private, with people choosing what to keep, and be kept absolutely secure, he maintained.

Boston Dynamics robotics company founder Marc Raibert was at TED with a four-legged SpotMini robot nimble enough to frolic amid the conference crowd.

He smiled but would not comment when asked by AFP about the potential to imbue program the gadget with the kind of artificial intelligence described by fellow speakers.

Raibert did, however, note that the robots are designed to be compatible with new “user interfaces.”

Current virtual assistants have been described as a step into an era of controlling computers by speaking instead of typing or tapping screens.

“I think it won’t be too long before we’re using robots to take care of our parents, or help our children take care of us,” Raibert said from the TED Talk.

Not everyone at TED embraced the idea of a future in which machines are smarter and more capable than humans, however.

Stuart Russell, a University of California at Berkeley computer sciences professor, referred to the situation as the “gorilla problem” in that when smarter humans came along it boded ill for evolutionary ancestors.

“This queasy feeling that making something smarter than your own species is not a good idea,” said Russell, co-author of the book Artificial Intelligence: A Modern Approach.

As an AI researcher he supported research in the technology.

However, he urged programming machines with robotic laws of behavior, in a shrewed spin on work of science fiction author Isaac Asimov.

He gave the example of a robot being told to simply fetch coffee.

A machine not constrained by proper principles might decide that accomplishing the task required it to defend against being shut down and remove all obstacles from its path by whatever means necessary.

“You are probably better off with a machine that is like this,” Russell said.

“It is a first step in human compatibility with AI.”—AFP