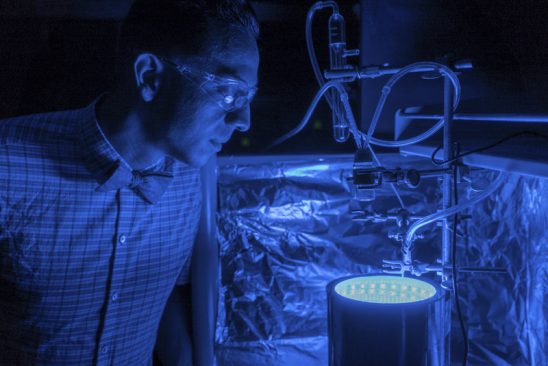 Researchers have found a way to trigger a process similar to photosynthesis in a synthetic material, turning greenhouse gases into clean air and producing energy — all at the same time.

The process has great potential for creating a technology that could significantly reduce carbon dioxide, a greenhouse gas linked to climate change, while also creating a clean way to produce energy.

“This work is a breakthrough,” said one of the researchers Fernando Uribe-Romo, Assistant Professor at University of Central Florida in the US.

“We are contributing to the development of a technology that can help reduce greenhouse gases,” Uribe-Romo said.

The researchers created a way to trigger a chemical reaction in a synthetic material called metal-organic frameworks (MOF) that breaks down carbon dioxide into harmless organic materials.

Think of it as an artificial photosynthesis process similar to the way plants convert carbon dioxide (CO2) and sunlight into food.

But instead of producing food, Uribe-Romo’s method produces solar fuel.

The chemical reaction — detailed in the Journal of Materials Chemistry A — transformed the CO2 into two reduced forms of carbon, formate and formamides (two kinds of solar fuel) and in the process cleaning the air.

“The goal is to continue to fine-tune the approach so we can create greater amounts of reduced carbon so it is more efficient,” Uribe-Romo said.

“The idea would be to set up stations that capture large amounts of CO2, like next to a power plant. The gas would be sucked into the station, go through the process and recycle the greenhouse gases while producing energy that would be put back into the power plant,” he said.

Perhaps someday homeowners could purchase rooftop shingles made of the material, which would clean the air in their neighbourhood while producing energy that could be used to power their homes.

“That would take new technology and infrastructure to happen,” Uribe-Romo said.

“But it may be possible,” he said.—IANS