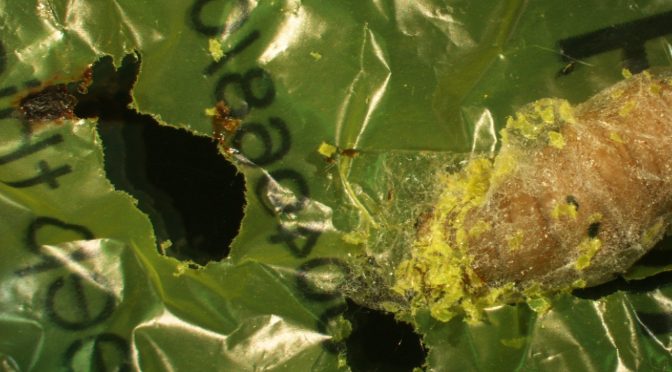 A solution to the global problem of plastic waste is in sight as researchers have discovered that the larva of wax worm has the ability to degrade plastic — which is incredibly resistant to breaking down.

The researchers believe that the findings, published in the journal Current Biology could help devise a biotechnological solution to managing polyethylene waste.

“We have found that the larva of a common insect, Galleria mellonella, is able to biodegrade one of the toughest, most resilient, and most used plastics: polyethylene,” said Federica Bertocchini of the Institute of Biomedicine and Biotechnology of Cantabria in Spain.

Although wax worms would not normally eat plastic, the researchers suspect that their ability is a byproduct of their natural habits.

Wax moths lay their eggs inside beehives. The worms hatch and grow on beeswax, which is composed of a highly diverse mixture of lipid compounds.

The researchers said the molecular details of wax biodegradation require further investigation, but it is likely that digesting beeswax and polyethylene involves breaking down similar types of chemical bonds.

“Wax is a polymer, a sort of ‘natural plastic,’ and has a chemical structure not dissimilar to polyethylene,” Bertocchini said.

Bertocchini and her colleagues made the discovery quite by accident, after noticing that plastic bags containing wax worms quickly became riddled with holes.

Further study showed that the worms can do damage to a plastic bag in less than an hour.—IANS