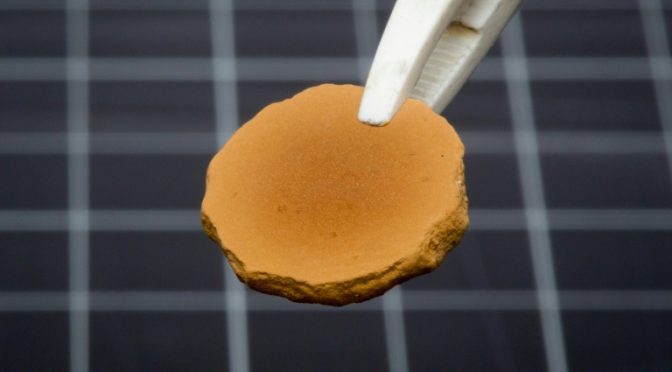 Scientists said Thursday that they have manufactured tiny bricks out of artificial Martian soil, anticipating the day when humans may construct colonies on the Red Planet.

Remarkably, the technique requires only that the red-hued building blocks be compressed in a precise way — no additives or baking required.

“The people who will go to Mars will be incredibly brave, they will be pioneers and I would be honoured to be their brick maker,” said Yu Qiao, a professor at the University of California San Diego and lead author of a study in Scientific Reports.

By accident, they had discovered that high-pressure compression hardened the artificial soil into rock-solid structures stronger than steel-reinforced concrete.

Once the stuff of science fiction, human habitation of Mars has captured the collective imagination, and inspired governments and billionaires to explore the feasibility of making the Red Planet a home away from home.

In March, the US Congress passed a bill — signed by President Donald Trump — directing NASA to send a manned mission to Mars in 2033.

Qiao believes real Martian soil could be compacted layer by layer to form a wall or shaped into larger bricks.

Previous ideas for how to make construction materials on Mars involved building nuclear plants to fire bricks, or hauling large quantities of polymer — a kind of glue — from Earth.

Professor Qiao’s proposed masonry, on the other hand, would be 100 percent made-in-Mars and require minimal resources.

Iron oxide — the component that gives Mars its reddish hue — is thought to be the “cementing agent” that makes the soil so malleable.

Whether real Martian soil would react in the same way is still uncertain, Qiao concedes — only on site tests would tell for sure.

But he hopes his approach will be given a hearing.

Qiao initially set out to use lunar soil to make cement. When he applied the same technique to Martian-like soil, he discovered its exceptional properties.

NASA’s Curiosity rover collected samples of Martian dust and sand for the first time in 2012, analysing its composition in a laboratory inside the mobile robot.

The soil was found to contain a complex chemistry of water, sulphur, and chlorine substances but no traces of organic carbon compounds that could indicate signs of life.—AFP